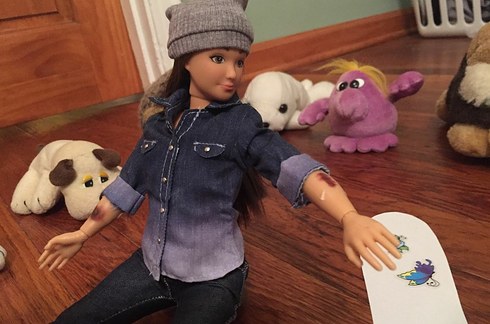 This past March, a man by the name of Nicholay Lamm decided to launch a crowdfunding campaign to help him raise money to create a new kind of Barbie doll. 8 months later, thanks to nearly 14,000 supporters, Lamm is now able to ship 19,000 new dolls to people. what makes his dolls so different? The whole premise of his design was to make a “normal” presenting Barbie doll with the physical proportions of an average 19-year old girl. 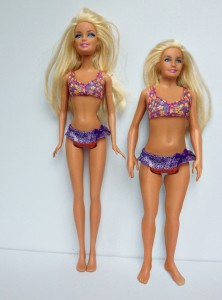 He succeeded and named his creation, “Lammily”. She has made news once again because this week Lamm debuted a new accessory for the doll in the form of stickers. There is now the option to purchase stickers for the doll that represent normal physicalities, including freckles, acne, scars, stretch marks, and tattoos. Lamm hopes they show that a variety of body types are natural and beautiful.

After debuting the new accessory, Lamm brought the dolls to an elementary school in Pittsburg to see how second-graders would react to them.

While I understand the intention behind the Lammily doll and acknowledge that it is indeed a step in the right direction to providing young children (especially young girls) accurate female representations, I feel like it could do a lot more. Most noticeably the first issue I had with the doll was its lack of diversity. I was glad that the Pittsburg school students weren’t lacking in diversity themselves, but I found it hard to believe that a young black girl could look at that doll and say she looks like her (which one did in the video).

I also didn’t feel comfortable with the way that they had the children have compare and contrast Mattel’s Barbie with the Lammily doll. Of course there are noticeable differences between the two dolls, that’s the whole point, but I feel like the Lammily doll could still as easily be appreciated for her realistic body proportions  without having the children point out the flaws with the Barbie doll. This article points out that changing the physical proportions of a fashion doll shouldn’t have that much of an influence over 5-year-olds because they’re more focused on the play-thing itself rather than thinking about whether the doll is a realistic representation of the female body.

I don’t know at what age young people start comparing themselves to the representations of people around them, whether that be through magazines and television or through the toys they play with. If the creation of the Lammily doll has a positive influence on young people by giving them access to more realistic representations of women that’s amazing. But it’s important to remember that although the Lammily doll is advertised as the “average” woman, that simply isn’t true. She might have the average body proportions of a 19-year-old American girl, according to the CDC but that doesn’t mean she is the “average” for every girl in America. Lammily is a white/white-passing doll with a more proportionate body shape and non-arched feet. In my opinion that’s setting the bar low for diversity in children’s toys.