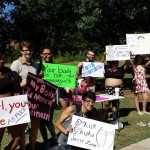 In an effort to combat body negativity and shaming, the URGE affiliate chapter at UNT hosted a Love your Body event where they held signs in the plaza with affirming, body positive messages during the day and had a discussion in the evening.

I Am Fat — And That’s More Than OK

I am fat. Of all the things that shape my identity, being fat probably falls within the top 5 most important. I’ve been fat for about as long as I can remember. My mother sometimes tells me forgotten old memories about the first few years of my life when I was thinner but those days are long gone. One of my most well-read pieces of published writing even centers in part, around me being a fat woman. So, once again — I am fat. Over the past few weeks I’ve found myself thinking more about my future life plans. One plan in particular had stuck out for me. Many people who know me know that I’d like to have four children. As an only child, I’ve always longed for a… Read more »

In Favor of a Full Bush: Why I Want Healthcare Education to include Pubes

This past week, as a part of my first official semester in nursing school, I learned how to insert a urinary catheter. A urinary catheter is a tube that is inserted into the bladder via the urethra when the bladder does not empty pee as normal. My nursing class learned how to insert catheters into urethras that were located above adult vaginas. The whole process of learning how to insert a catheter began with reading about it, then watching a video on how to do it, and finally practicing on a mannequin that is supposed to simulate a real life adult human person. While I watched the catheter-insertion video and then later in lab while I readied my mannequin’s vagina for practice, I was perplexed. Why? Because both the mannequin… Read more »

One of the world’s most iconic dolls went full feminist this week. Mattel, the company that owns and operates the Barbie brand, finally acknowledged that marketing a white doll with physically impossible proportions as the “ideal woman” to young girls was dangerous. Because of Mattel’s brave move, little kids will no longer be sold toys that conform to white European standards of beauty and that tell young girls that their value stems solely from their ability to attract their very own Ken. Mattel apologized, pulled all Barbie dolls from the shelves, and used the money they would’ve spent on marketing to finally pay their workers fair wages. No, I’m kidding. Of course Mattel didn’t make these far-reaching changes. But they did add almost half an inch to one of the doll’s waist, died… Read more »

Nicki and Jenny: Different Approaches To Being One Of The Guys

I have a love for music videos. I remember getting ready for middle school and having VH1 on (The Top 20 Video Countdown remember?) in the background. I would stare at the women on the screen and idolize them. To me they were the epitome of fame, beauty, and femininity. As I’ve grown older my love for music and music videos has remained with me, but one thing has changed dramatically. Now I view every piece of media I consume, not just music videos, through a critical lens. I hate to admit it, but sometimes it takes the fun out of a piece of media that, had I just consumed blindly, I would’ve completely loved. But it makes me realize just how important it is that the media that is… Read more »

The Real Reason Students Are Fighting for Leggings

Most middle school girls learn the tricks of avoiding being sent home because of their clothing choices. They can scrunch up shoulders to avoid the fingertip rule, hide from the teacher that walks around with a ruler to measure tank top strap width, or sneak a sweater in a backpack for when the principal is around. Schools have had the right to implement dress codes since Tinker v. Des Moines Independent Community School District. Dress codes are put in place to decrease class room distractions. They also can help students from a lower-income background receive less shame if they cannot afford the expensive popular clothing brands. However, the intentions have mutated to have sexist connotations and lower a student’s self-esteem. Two years ago a principal in Minnetonka, Minnesota sent an… Read more »