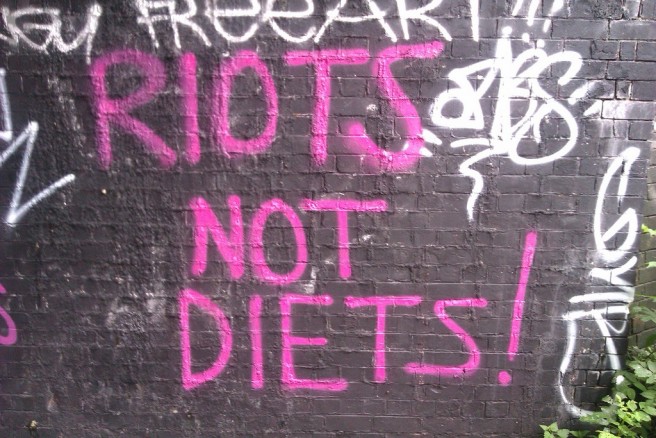 One of the world’s most iconic dolls went full feminist this week. Mattel, the company that owns and operates the Barbie brand, finally acknowledged that marketing a white doll with physically impossible proportions as the “ideal woman” to young girls was dangerous. Because of Mattel’s brave move, little kids will no longer be sold toys that conform to white European standards of beauty and that tell young girls that their value stems solely from their ability to attract their very own Ken. Mattel apologized, pulled all Barbie dolls from the shelves, and used the money they would’ve spent on marketing to finally pay their workers fair wages.

Of course Mattel didn’t make these far-reaching changes. But they did add almost half an inch to one of the doll’s waist, died another doll’s hair a real edgy blue and finally included a black doll with natural hair.

Given all of the absurdly positive press celebrating Mattel’s new body positive Barbies, you’d think Mattel had suddenly taken up the radical feminist mantle. Instead, in their ever-expanding search for new ways to increase profits, they’ve hitched their wagon to the body positive movement.

But let’s not forget what’s really behind Mattel’s pitifully transparent pandering. Companies like Mattel, extract the least controversial aspects of activist movements like body positivity and fat acceptance in order to garner their company more good press. These moves benefit their brand, but fail to meaningfully address the oppression of fat people.

Here’s where I think most people would argue, ‘but Carley, it’s not a company’s job to promote body positivity and fat acceptance.’ And I would certainly agree. I don’t mean to absolve companies of their social responsibility, I mean that companies can never be part of the body positive movement because their sole motive has always been and will always be increasing profit.

Often, people argue that changes, even painstakingly small changes like Mattel’s, are better than nothing. Here’s where I depart from the well-meaning excuses we make for companies. I would actually argue that the profit motives of companies like Mattel stand in the way of our feminist utopia where body positivity and fat acceptance are the norm. Because when I think about the ultimate goal of the body positive and fat acceptance movements, creating and profiting off of insecurities that women have about their bodies is not included. Ultimately, a self-love and self-acceptance that is rooted in consumerism is  illusory because there will always be something new to buy or some invented body part to fix.

Instead, body positivity and fat acceptance movements advocate for a radical reinterpretation and inclusive way of valuing all bodies. We’re not waiting for society to tell us they’re ready to consider slightly bigger bodies attractive and profitable. We’re saying that “fat” is not a bad word, that there are many ways to have a body. Ultimately, everyone should be afforded respect, dignity, and love because of their essential humanity, not because a new doll looks just like them.