CONFEDERATE MONUMENTS ARE NOT “HISTORY,” THEY ARE ACTIVE RACISM 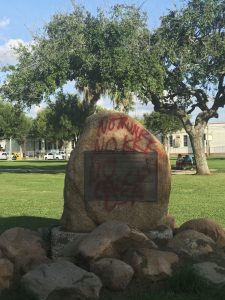 Last week, the Jefferson Davis confederate monument in my hometown was defaced. “No Trump! No KKK! No Fascist USA” was spray painted in red across the plaque. The Davis monument is one of several monuments and buildings in the Rio Grande Valley that commemorate the Confederacy. The vandalization of the monument came at a time when racism dominated both our local and national headlines, proving the rhetoric of the Confederacy has not retreated into history– it is active and present.

When the President addressed the Charlottesville, VA white supremacist rally, he directed his words at the “very fine people” that wanted nothing but the preservation of “beautiful confederate monuments. By seeking to protect confederate monuments, the President also protects Nazis, white supremacists, and condones violence against people of color. Last week, the President made news by calling black football players “sons of bitches” for taking a knee during the national anthem to protest police brutality against black people. The peaceful protest that black Americans engaged in was automatically seen as “disrespect” by white America. The glorification of the confederate legacy by white America is a directly related to the dehumanization that black people face in the US every day.

Unfortunately, racism and the preservation of white supremacy does not only exist within white spaces. Recently, the news was dominated by the racist language used by city commissioner Cesar de Leon. A white Latinx, de Leon was recorded directing racial slurs at black attorneys. Anti-black racism is prevalent among our Latinx communities and the use of racial slurs is rampant among Latinxs in the Rio Grande Valley. What this means is that in a predominantly POC place, non-black POC continue to use anti-black speech that upholds white supremacy.

The preservation of the Jefferson Davis monument in our hometown is a symbol of the white supremacy that still pervades. Confederate monuments are a hyper-visible declaration of power. Craig Stone, a member of the Sons of Confederate Veterans Mechanized Cavalry in the Rio Grande Valley spoke with pride of the Jefferson Monument in Brownsville. According to Stone, the monument was “bought and paid for by the Magruder-Ford Chapter of the United Daughters of the Confederacy and erected in 1926 on Palm Boulevard in honor of their Brownsville ancestors.” Even more disheartening, the Brownsville Historical Association partnered with the Sons of Confederate Veterans to celebrate “Confederate Heroes Day” at Washington Park. It is disrespectful to our community to allow these partnerships, and to allow the confederate monument to stand.

The Confederacy left behind a legacy of hatred and entitlement. Black and brown people in Texas suffered greatly because of leaders like Jefferson Davis. We cannot allow the glorification of an atrocious message to stand because it is “history.” When people defend racist monuments because of “history,” they do so while actively supporting the censorship of people of color’s history. When we fight to take down Confederate monuments, we are not advocating for the erasure of the past. We do not want these hyper-visible symbols of white supremacy in our communities. If the Charlottesville rally taught us anything it’s that the Confederacy is not history, it is here, and it is violent. Allowing Confederate monuments to stand is allowing violence against black and brown bodies to stand. Allowing Confederate monuments to stand prioritizes the comfort of white America over the lives of families of color.