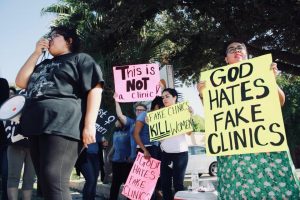 Crisis Pregnancy Centers are essentially fake clinics. These non-medical facilities exist solely to push anti-abortion propaganda onto people seeking abortions.  In the United States, there are over 4,000 Crisis Pregnancy Centers. In Texas, CPCs receive millions of dollars in funding. Through state programs like Alternatives to Abortion and the Texas Pregnancy Care Network, Texas is able to funnel state money into Crisis Pregnancy Centers. During the 2018-19 state budget debate, the Texas House approved 20 million per two-year budget cycle for the Alternatives to Abortion program. The state of Texas funnels the money through the Texas Pregnancy Care Network, making it impossible to know how much taxpayer money is going to an individual CPC or CPCs as a whole. However, we do know that over 23.5 million dollars of taxpayers’ money has gone to TPCN in the past five years.

Crisis Pregnancy Centers’ main purpose is to promote an anti-abortion agenda. Because they are not an actual medical facility, CPCs are able to lie to patients in order to manipulate and coerce them into parenthood. For example, CPC counselors have told patients that abortion would cause psychological damage, future miscarriages, and breast cancer. Delay tactics are employed by CPCs in order to manipulate patients. CPCs will delay appointments, lie about how far along patients are in pregnancy, and convince them that abortion access is “easy.” Crisis Pregnancy Centers also demonize abortion providers and will use the “free counseling” they offer in order to promote lies about abortion clinics. For example, a CPC counselor told a patient that Planned Parenthood was trained to convince people to have an abortion in order to meet a quota. This is extremely dangerous because CPCs deny women of the opportunity to seek prenatal care, appropriate medical services, and the ability to access an abortion in time with proper information. 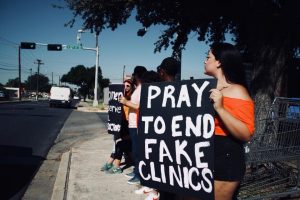 Crisis Pregnancy Centers do not offer medical services or competent counseling. They are fake and manipulative facilities that target patients in need of actual medical assistance. The state of Texas not only upholds CPCs, they also defund actual family planning clinics. Last year, Texas took money from the Temporary Assistance for Needy Families program and the Texas Commission for Environmental Quality program in order to fund the Texas Pregnancy Care Network and Alternatives to Abortion programs. The fact that anti-abortion propaganda is more important to the state of Texas than the actual well-being of its inhabitants is violence. Taking money that could be used to actually help people in order to employ coercion tactics that advance an ideological agenda is violence.

CPC state-sponsored violence is clearly seen in the case of Jane Doe, an undocumented 17 year old seeking an abortion. Jane Doe was held hostage by the federal Office of Refugee Resettlement in Brownsville Texas. Not only was Jane Doe forced to obtain a judicial bypass in order to seek an abortion in the state of Texas, the ORR forced Jane Doe to miss two appointments and instead sent to a Crisis Pregnancy Center as she neared the 20 week mark of pregnancy. Jane Doe was sent to the CPC in order to get counseling for minors directed to dissuade them from having an abortion. These obstacles are deliberate efforts to prevent Jane Doe from making decisions over her own body. Instead of allowing Jane Doe to make decisions about her well-being, the state and the federal government imposed violent laws on her under the guise of protection. 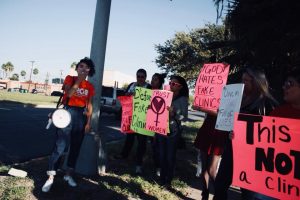 Jane Doe isn’t alone. In Abilene, Sadie, a pregnant 13 year old, was only able to access free resources at a Crisis Pregnancy Center. Funding cuts in Texas forced actual family planning clinics to either shut down or start charging clients. Because of this, Sadie was only able to get biased counseling at her CPC instead of actual counseling and medical services from a free family planning clinic.

If the state of Texas actually cared about pregnant people, they would increase funding for actual family planning clinics and abortion providers instead of Crisis Pregnancy Centers. People should be able to access actual medical care without fear of being manipulated and lied to. Crisis Pregnancy Centers are actually violent, they put people in danger by denying them of actual information that pertains to their well-being.