Debunking Some Misconceptions Around Islam 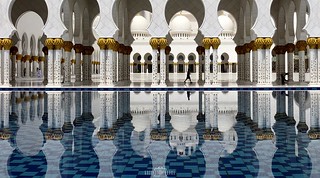 Recent statements by conservative presidential hopeful Ben Carson on Islam, actions by University of Missouri students, and the controversy started by some alumni of Wichita State University over a chapel were just small reminders that this country has a problem with bigotry against Islam that has barely changed since right after 9/11. In response to the increasingly islamaphobic rhetoric, I wanted to debunk a few common myths. (Note: I am not an expert in the religion but I did consult with some devout Muslim friends of mine to avoid perpetuating any misconceptions of my own. So please, after reading this article I encourage you to do some research of your own.)

1. All Muslims are Arab

Somehow people have come to believe Islam is only an Arab practice. This might be because of the approximate 20 years of our heavy military and police action involvement in the region around Iraq and Iran. According to an article posted by the Pew Research center, there are 1.6 billion (yes billion) people who practice Islam. That makes it the second most practiced religion behind Christianity in the world. 61.7% of the 1.6 billion live in the Asia-Pacific region. As the article states, “more Muslims live in Pakistan and India than the entire Middle East-North Africa region.” That’s a swift kick in the butt for that myth.

This one is my favorite misconceptions. Not because I like to think that all Muslim women are oppressed, but because some of the most bad ass women I’ve interacted with personally were Hijabi women. There’s a difference between cultural practices, which often put women below men, and the practices called for by a scripture. When dealing with social issues like feminism we have to make the distinction between the two. The Quran states many times in many different ways that men and women are equal and also argues against the common cultural ideal that views daughters and a burden rather than a blessing because why would God (Allah) create daughters if they were not worth something?

Jihad linguistically means struggling or striving. This idea deals with the internal conflict one may have when trying to practice their religion the best they possibly can. There are instances that jihad has been used to fight religious wars, but not just anyone can declare a religious war. (Read: terrorist groups do not have the authority to wage official jihad) The most prevalent official jihad dates back to the Crusades and the Islamic defense.

It is not a militaristic dictatorship that many islamaphobic pundits would like the general population to believe. What it really is a set guidelines for life. It covers social issues like marriage practices and legal philosophy.

5. Muhammad is the Muslim Messiah

No. Muhammad (peace be upon him) is the prophet who comes after Jesus. In the Islamic faith, Jesus is not the son of God (Messiah) but a prophet like Noah, Enoch, and Adam and carried the message of Islam just like the rest. Muhammad (peace be upon him) was the last prophet in Islam. There are no portraits or sculptures of Muhammad because Islam calls for not idolizing or worshiping any of the prophets.

I started to touch on this one in #5. This is probably the biggest misconception that is perpetuated by people who don’t know anything about religious history. Islam is an Abrahamic religion, just like Christianity and Judaism. The difference between God and Allah is purely language. Because the Quran is written in Arabic, Allah is used instead of the English word God, similar to the way English speakers say God instead of the Latin word Deus.