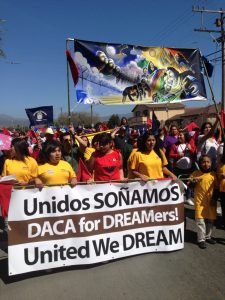 DACA, the Deferred Action for Childhood Arrivals Program, is in danger. The program allows young immigrants to apply for a renewable two year visa to work and study in the United States. The program does not put recipients on a path to citizenship or resident status, but allows 800,000 people to live in the United States with access to resources that would be otherwise unavailable. DACA recipients are able to get a social security card, get a driver’s license, apply for employment “legally,” and apply to college. In a time when undocumented immigrants are vilified, programs like DACA counter that narrative.

But the current administration is threatening to end DACA. It is heartbreaking to know that DACA recipients could potentially lose everything they have worked for. At a time like this, personal stories are a powerful way to gain empathy, engage direct action, and build support. However, too often the media, politicians, and well-intentioned allies demand immigrants and their stories to fit a particular narrative that promotes the idea of a “model immigrant.” At the same time, they dehumanize and further marginalize other immigrants who do not fit the rigid mold. The “model immigrant” is productive, hard-working, successful, and has a gone through a lot to get to their current place of stability. The hardship and pain undocumented immigrants go through is exploited in order to advance the “model immigrant” idea and used as pain porn to garner empathy from those in power.

In the case of DACA, those who support the decision to terminate it do not see immigrants as human beings worthy of human rights to begin with. We want to change their minds, and we want to tell the stories of the people that will be affected. As allies, we must consider ways to share the stories of DACA recipients without exploiting their suffering, and without reinforcing the notion that only a few, highly successful immigrants are worthy of our compassion and support. The complexity of the lives that will be affected by DACA should be told, but without placing hierarchies, and without exploiting people’s trauma to get those in power to care.

In the age of Trump, people of color are non-humans debate topics, and our existence is political. As immigrants, we are statistics, profit-makers, and labor. The discourse around DACA is just that. White people, legislators, the President, and citizens of this country continue to talk about Dreamers and immigrants with this language. Allies appeal to those in power using this language. Immigrants are forced into vulnerable positions, where they are now only the story that appeals to white people.