Disabled People Have Sex – Get Over It 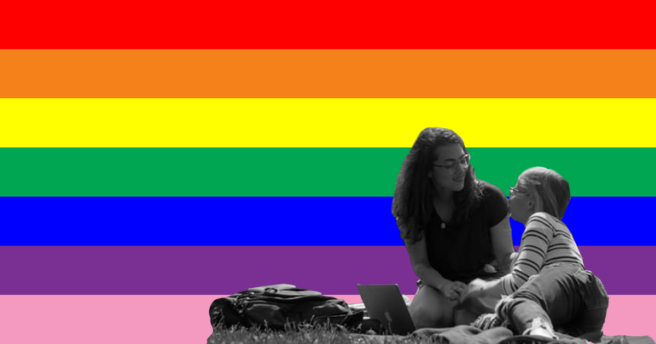 Deaf U dropped on Netflix a few days ago and as a person who falls somewhere on the deaf spectrum, it was a series I was pretty reluctant to watch. The series revolves around the lives of a handful of students who attend school at Gallaudet University in Washington DC, the oldest Deaf serving institution of higher learning in the United States. From the first few minutes of the show, we know hearing people are the target audience; since the editing made it impossible for those fluent in sign to track the conversation, the captions were superimposed onto the show, and plotlines centered around petty drama rather than what it means to be a gen-Z capital-D Deaf in our world. While representation in mainstream media is always a nice thing to see, shows like this always seem to have the general theme of assimilation, highlighting the concept that “we’re really just like everyone else.” The show, other than having only deaf and hard of hearing characters, is identical to any other reality show’s formula with one noticeable exception – an even heavier emphasis placed on sex.

In the reviews for the series, many of the reviewers seemed surprised at this content, even though college kids exploring their sexuality is a well-established media trope. Even in the New York Times, a respected publication based in America’s most diverse city, they wrote that “the deaf and hearing-impaired* students at Gallaudet University are as obsessed with sex as any other college-age human being…”

Sex and sexuality, obviously, isn’t something that should be taboo. The show’s conversations around the issue were productive, ranging from petty gossip about the university’s hookup culture to candid conversations about the main character’s abortion story. I couldn’t help but wonder, however, why out of all the conversations we could be having to educate the outside world about Deaf culture, that the creators decided to select sexuality as the main focus?

The consistent infantilization of disabled people is one of the only generalizations we can make about human culture, and it’s something that you’ve most likely contributed to, whether you know it or not. One of the most popular ways to gather likes on social media is by either making posts that frame disabled people as “inspiring” for doing everyday activities, or sharing videos where a disabled person is “cured” of their perceived impairment. Disabled people aren’t seen as whole people by the mass majority, instead, they’re forced to live in a world where doing basic life activities is a barrier-breaking event that in some cases requires legal permission. Capitalist cultures look down on people who are deemed to be “less productive” than others, a category that many place the disabled community in.

It’s important to note that many academics and activists (myself included) believe that the true disability isn’t the physiological differences, but the incessant nature of ableism that keeps disabled folks in the category of second-class citizens. Those in Deaf, autistic, and other disability circles argue that with simple adjustments to attitude, architecture, and language access, we’d be able to complete tasks at the same levels as our able-bodied counterparts. Some even reject the label of disabled entirely.

It’s only natural that the outlook of disabled people as children would progress towards the de-sexualization of the group. Sex education, if given at all, is written from the heterosexual and able-bodied perspective, leading many to see disabled folks as collectively asexual beings. In a book on the topic of disabled sexuality, many of those interviewed claimed to have never been given any information on sex while their non-disabled siblings did. All this combined with the beauty standards our culture holds dear has led to the injustice of depriving one of the largest minority groups in the US of their right to their own bodies.

The de-sexualization of the disabled community has significant effects on the mental health and self-image of those impacted. Many people fear being rejected or fetishized by those on the outside, leading many to not pursue more romantic interactions. Others with more invisible disabilities, like chronic pain or autoimmune disorders, even hide their conditions from partners and only “come out” when they feel emotionally safe in the relationship. While studies on disability and self-image have largely come back as even more positive than able-bodied folks, the “evaluate gaze” from the latter inflicts feelings of judgment and discomfort in their sense of self.

In some ways, the deprivation is more literal than metaphorical. 90% of people with intellectual disabilities, according to the US Department of Justice, experience sexual abuse in their lifetime, with 49% of that group experiencing it over 10 times. This is the highest rate amongst any group in the country and is hardly addressed in any meaningful way. Much of the abuse occurs in assisted living, elderly, and group homes where staff members have basically unlimited and unsupervised access to their patients. This, along with the lack of personal boundary education given to those who rely on their home’s staff for their care, leads to rampant levels of abuse that’s often difficult to fight in the court of law. In places where “open door visiting” policies amongst residents are the norm, sexual autonomy is revoked at every angle.

If I’m being honest, I liked Deaf U just as much as I predicted I would. I thought many aspects of the show were exploitative towards both the participants and the community at large. It reduced a vibrant and beautiful culture into another novelty made to entertain those on the outside, who have no honest desire to learn beyond it. I do, however, understand that the prominence of sexuality in the series was designed to combat the idea that deaf people, and the disability community at large, are not immune to the desires the rest of the world indulges in. Sexuality, no matter how much cultural conservatives want to argue it, is an inherent part of the human identity. We as a society need to realize that people of differing abilities are allowed to be sexual without being labeled as deviant. Depriving people of or stigmatizing their bodily autonomy, is a cruel ableist tool of oppression that has far-reaching and devastating consequences.

(*also, hearing-impaired is a slur, so stop using it!)