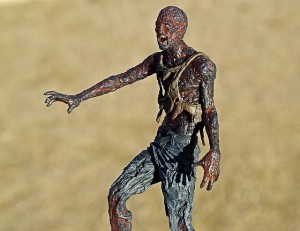 Part-time Texas Governor and full time conniving Slytherin, Greg Abbott, announced his encouragement of Texas House Bill 2899, which bars transgender individuals from using the bathroom consistent with their gender and overturns any anti-discrimination ordinances passed by Texas localities. HB 2899 is the evil spawn of Texas Senate Bill 6, which had similar aims but is being held up by Speaker of the House Joe Strauss, who is taking his sweet time (probably intentionally) to assign the bill to a committee. Without a committee assignment, the bill has lost traction. This stall apparently concerned hateful lawmakers, who seem hell bent on passing any type of trans-discriminatory legislation before the Texas session is over in May.

So how bad is this resurrected bathroom bill? IT’S TERRIBLE! UGLY! NO GOOD! Brainless, decayed and unnecessarily resurrected. That’s why I called it a zombie. As I stated earlier, this proposed law would nullify any anti-discrimination ordinances passed by Texas localities. Hello, Tea party? Isn’t this is where you stomp and shout about big government interference??? Ironically, the politicians who proposed the new bill seem to think that it is more “moderate” than the previously proposed SB 6. Yeah, it’s not.

This past Wednesday, the House State Affairs Committee held a hearing on the new HB 2899. 72 Texans offered their opinions on the bill, with 66 out of the 72 opposing it. While these seem like reassuring numbers, I am not comforted or confident. Trans lives and rights continue to be an anti-choice political target.

As Aleo pointed out in a previous post, bills like this have nothing to do with physically protecting cisgender folks and everything to do with demarcating public space as unwelcoming to trans and nonbinary individuals. Proposed legislation like this continues to be a distraction from the real needs of everyday Texans and a shameful waste of taxpayer time and money.

Speaking of devil spawn and zombies, there is one name that continuously comes to my mind when I read about the Texas bathroom bill: Phyllis Schlafly. I remember Phyllis’ voice humming along sickeningly over my Houston radio waves back in 2015, when our city nearly passed the Houston Equal Rights Ordinance, or HERO for short. This protective legislation aimed to prevent discrimination on the basis of more than a dozen classes. Cue Phyllis, who made it her mission to ensure the continuation of bathroom segregation based on the gender binary. Phyllis was prominently featured by the anti-choice campaign against HERO. She already had plenty of ammunition, because centering bathrooms was a tactic she used in her campaign against the Equal Rights Amendment in the 1970s.

Now that bathrooms are once again the subject of proposed legislation, I can’t help but worry: Phyllis, is that you again? Fuck off, dead Phyllis! Human rights now and forever!