Fire Shut Up in My Bones: A Memoir by Charles M. Blow 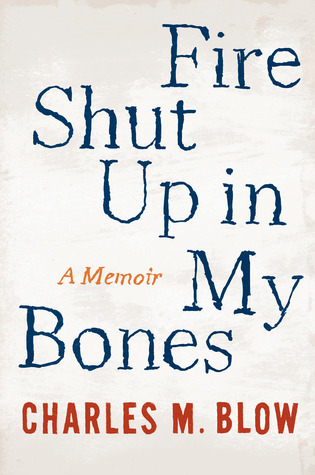 The past two weeks  have been rough to say the least. It was one of these weeks when your world is turned upside down by unsettling news. I had to readjust my life and face new “normals.” I sought help from close friends and family. I deem the past two weeks and exercise in mental health. I often find that we speak of a physical health often unconnected from mental health. While going through my struggles in the last few weeks,  I came across an op-ed article entitled “Up from Pain” from one my favorite columnists, Charles M. Blow.

Charles M. Blow is an opinion columnist for the New York Times. His article “Up from Pain” in the The New York Times reads like an excerpt from his recently released book Fire Shut Up in My Bones. He describes his experiences with sexual assault by his cousin and the development of his sexual identity in the South.  As he ages, he begins to define himself as bisexual while understanding that he finds himself more attracted to women. At points in his life, he attempted suicide and killing his assaulter. I look forward to purchasing his memoir, as it will lead to new conversations about hyper masculinity and sexuality, especially in the black community. It also sheds more light on how the amalgamation of our experiences shape our identities.

I have learned that hearing these stories create much needed dialogue. They also give voice to people who have had similar experiences. I have included quotations from the book below as well as my interpretations of them to explain the range of topics he addresses.

In an NPR interview, he explained that he was inspired to tell his story after learning about two 11-year-old boy who committed suicide ten days apart from one another due to homophobic bullying from their peers. He felt a connection to them as he has harbored feelings of suicide.

1. “Children can’t see their budding lives through the long lens of wisdom – the wisdom that benefits from years passed, hurdles overcome, strength summoned, resilience realized, selves discovered and accepted, hearts broken but mended and love experienced in the fullest, truest majesty that the word deserves. For them, the weight of ridicule and ostracism can feel crushing and without the possibility of reprieve. And, in that dark and lonely place, desperate and confused, they can make horrible decisions that can’t be undone.”

He explains that we do not benefit from the experiences that shape our lives when we are young. In our youth, everything feels permanent and pain feels overwhelming and constant. He spoke about his youth in the NPR interview. He explained that sexuality as a youth was a murky concept. To him, it was expressed through kissing. His first sexual encounter occurred when he was very young.

2. “Concealment makes the soul a swamp. Confession is how you drain it.”

The pains that cause us to suffer pile up. In sharing our stories with others, we unleash some of the pain.

3. I had to stop romanticizing the man I might have been and be the man that I was, not by neatly fitting other people’s definitions of masculinity or constructs of sexuality, but by being uniquely me — made in the image of God, nurtured by the bosom of nature, and forged in the fire of life. I needed no cure because I had no infirmity. God need send no angel to trouble the water.

There is no such thing as normalcy and worth cannot be measured by how people have chosen to define others. We are all born deserving value and respect, which can never be taken.

3. I would have to learn to accept myself joyfully, fully, as the amalgamation of both the gifts and the tragedies of fate, as the person destiny had chosen me to be — gloriously rendered, deeply scarred, magnificently made, naturally flawed — a human being, my own man.

There is power in self-acceptance. We must accept ourselves and embrace our flaws and strengths.

Charles M. Blow’s narrative brings about themes of humanity, dignity, and acceptance to create power. His experiences should not be confined to blackness or bisexuality. Blow’s story speaks to humanity and self-discovery. These two themes are accessible to everyone.  The honesty and complexity of his story explains the importance of self-realization and mental health. This book, for him, is a cathartic exercise helping to reflect upon his family, his experiences, and his environment.

He embraces the fluidity in his life and the pain in his experiences as part of his identity.  All too often, I find that we lack the tools and resources we need to assist us in times of pain and overwhelming anger.  Blow encourages us to find strength in our experiences rather than allowing pain to overcome us. He is no stranger to pain and his story has resonated with me.

As advocates for reproductive and gender equity, we work to construct our lives rather than having them constructed. Charles Blow, amidst his environment, works to actively construct his experiences in to powerful messages. I encourage us all to do the same.