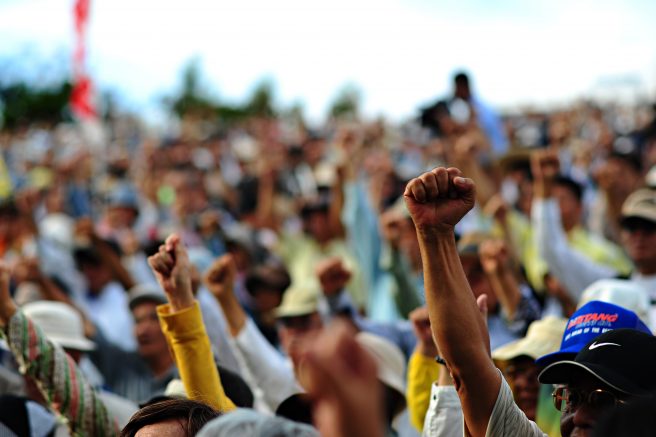 I remember the exact date of the last time I was truly shocked about something I saw in the news: November 8, 2016. Or, more like November 9, 2016 at about two a.m. before I forced myself to go to sleep and hoped that all would be better in the morning.

There are few things that I have been sure of in life, but one thing I truly believed was that justice would be always inevitable be served. It didn’t matter how much hate or prejudice still lived in this country, the majority of Americans knew what was right and would make sure that everyone was treated fairly in the eyes of the government. So when the presidential election happened last year, I had no doubt—Trump had his supporters, but most of the country would see him for what he really was. And I was right. Unfortunately, it was the wrong people.

When people talk about what went wrong in the presidential election, they blame people for not showing up at the polls to vote. Considering Hillary Clinton won the popular vote by a landslide, this is obviously not true. People showed up. They made their voices heard, but it wasn’t enough. Because at the end of the day, a racist and archaic institution, known as the Electoral College, had the final say. The government, which although is at its most racially diverse at the moment, still has an overwhelming majority of cishet white men representing our country. Progress is happening at a slow pace and noticing any difference in our society becomes harder.

Recently, the Charlottesville protests shocked the country a bit more than usual. What was shocking to most was not the protest itself but the way Trump responded to it—by not really responding at all, at least not in any meaningful way. If people are shocked that Trump won’t speak out against white supremacy, they must be unaware as to where most of his following comes from. He may have managed to get elected without the majority of the country behind him, but if he loses his white supremacist followers, his base will drastically decrease.

What bothers me more than anything is how people can still be so surprised by Trump’s actions and rhetoric. Last week, he signed a directive that banned transgender folks from serving in the military because they were ‘too much of a burden on their military costs.’ The same man who claimed to want to fight for LGBTQ+ rights during his campaign (which, yes, some people actually believed) is now publicly announcing that transgender people cannot have a basic American right. His followers stood by him then. Just like they stood by him after he said every hateful thing towards every marginalized group he could think of during the election cycle, proving he has kept his promises when it comes to hate. He stands by his ideas about immigrants and plans to end a program that could possibly deport almost a million children from the country they grew up in. This is our reality. This is our president.

It is not helpful to simply gawk at Trump’s despicable actions. Anyone who has been paying any attention over the past two years should not be shaken. Things will never change if we just hope they will. The problems we’re facing now have deep roots in our nation’s past and in the systems that make up our government. This is more than simple bias and prejudice—our country was founded on ideas that didn’t include anyone who wasn’t a white man. It would be wrong to say that we haven’t made any progress, but it is not nearly enough.

The best and only solution is to put more people from marginalized groups—people of color, LGBTQ+ people, etc.—in leadership positions. The next presidential election won’t be for another three years, but when the elections for your state senators and representatives come around, go out and vote! Those people elected to Congress are the people who have the final say when it comes to what our neighborhoods and community services provide. We cannot allow those elections to go by without our voices being heard as well.

Right now, it may seem like there’s nothing you can do, especially if you’re young. But we really can make a difference—it sounds corny, but it’s true!  Think about it—Donald Trump managed to become the President of the United States. That alone proves just about anything is possible. I know that a lot of people don’t have the kind of privilege he has, but his lack of qualifications proves that people don’t necessarily have to already be in politics to get involved. The Electoral College doesn’t seem to be going away soon, so let’s make sure we make the system work for US. Nothing’s ever going to change unless we make it happen. And we can make it happen.