Getting Your Period Shouldn’t Be This Expensive 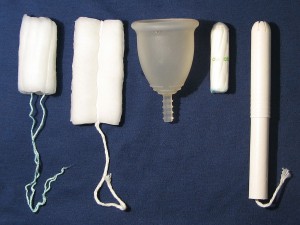 I admit that, until recently, I was only aware of the luxury tax on tampons in the UK. I didn’t think it was a problem anywhere else, probably because of the  strong media campaign that has been used to target and change the tax code on menstrual supplies in the UK. The issue on the domestic front has not seen the same amount of media frenzy, which could play into some of the reasons we aren’t talking about it stateside.

One could speculate that part of the reason tampon taxes don’t received the same kind of media push back in the US is that there isn’t one uniform tax code to fight. States all set their own guidelines for sales tax. But that only makes tampon tax harder to fight universally, not impossible. For many states, sales tax exemptions for necessary items, such as food or over-the-counter medical items, but not tampons according to 40 states. What is considered necessary to those states, however, can sometimes be a little questionable.

Under the food sales tax exemption, some things manage to slip through as “necessary” like, for example, candy. The Idaho tax commission attempted to justify not exempting tampons from sales tax under over-the-counter medical items by stating, “Tampons and pads are used for feminine hygiene and not for use in the diagnosis, cure, mitigation, treatment or prevention of feminine diseases.” That’s an interesting claim that suggests officials care about women’s health from a state that received an F on NARAL’s report card for reproductive health and rights. Even then, assuming the issue is actually about health vs hygiene, it is well known that poor hygiene can lead to poor health therefore not taxing hygienic materials would be an attempt to prevent “feminine diseases.”

That’s the issue though. Tampon taxes are more than just a debate on what can and can’t be considered a medical or hygienic necessity. They are about finding  more expensive ways to inconvenience vagina owners. Currently in California, there is a legislative campaign to allow tampons and pads to be classified as a tax exempt necessity. There alone, the state makes $20 million in sales tax on tampons annually. A California legislator figured that the individual pays $7 monthly on tampons. Assuming that someone would need tampons or pads for 40 years that adds up to just short of $3,500.

Thankfully, although 40 states tax people for tampons currently, the back against it has started to increase. Five states are currently questioning their sales tax policies around this issue, and even in the North American region, Canada recently stopped their tampon tax. These are small steps, but they are steps forward nonetheless.

One Response to “Getting Your Period Shouldn’t Be This Expensive”