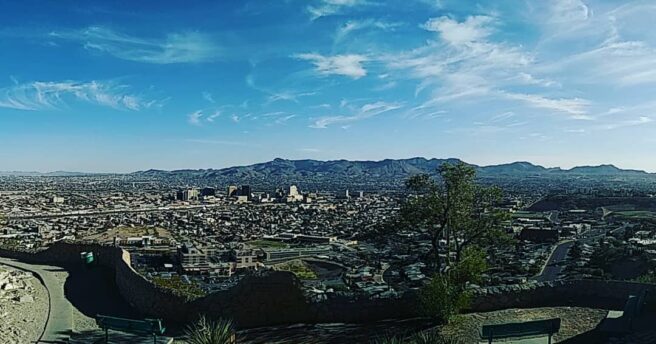 View of the U.S./Mexico Border from El Paso, TX.

The passage and eventual enactment of Texas Senate Bill 2 (S.B. 8) has people rightfully concerned over abortion access in Texas. S.B. 8 limits abortion procedures past six weeks, before most people even know they are pregnant. As researchers and reproductive advocates have already pointed out, S.B. 8 creates several barriers for people seeking abortions beyond the six-week limit. For people seeking abortions after six weeks, they must travel to the nearest state that performs abortions. Consequently, the clinics in these states are being overwhelmed with patients traveling from Texas in addition to their usual patient load. Most notably, there is also the ten-thousand-dollar reward that people who report individuals who help someone receive abortion care after six weeks can receive. However, something that is less talked about is how S.B. 8 affects undocumented individuals who need to access abortion past six weeks in Texas.

The U.S./Mexico border is heavily policed. Part of this policing is what is known as the 100-Mile border zone. As its name suggests, the 100-mile border zone is the area up to 100 miles inland in the U.S. from any of its given borders. This zone applies to all of the U.S.’s borders but is more strictly enforced along the border with Mexico. In this area, border patrol is given extra authority, part of which allows them to conduct searches. Border Patrol usually conducts these searches through border patrol checkpoints, where border patrol agents will ask travelers for proof of citizenship. In the case of public transportation, border patrol agents will board and ask travelers for this proof. Border Patrol also uses drug dogs and cameras to check for potential drug smuggling.

As someone who lived on the border, I can recall back to the countless times where I was required to go through a border patrol checkpoint. Each experience followed a similar routine but was different depending on the border patrol agent and their mood. And while agents technically cannot hold people or conduct searches without cause, it does happen. For example, in high school, I went on a hiking trip with some classmates to Big Bend National Park. On our drive, we passed through the Sierra Blanca checkpoint on our way to and from the park. On our way back home to El Paso, I rode in the smaller car that was part of our group. Our group ended up pulling over on the rode to re-arrange ourselves and put more of our luggage in the trunk, since the car was small and cramped. As we did this, a sheriff’s car drove past us. We thought nothing of it, until we pulled into the Sierra Blanca checkpoint. There, border patrol agents told us that the drug dogs had detected something in our car. We were held for over an hour while our car was searched. During the search, border patrol agents questioned us about our trip. Eventually the border patrol agents asked us if we were trafficking drugs. When the agents were satisfied that we were not drug traffickers, they let us leave. This is when the border patrol agents mentioned that the reason that they stopped us was because a sheriff had reported “a suspicious vehicle” matching our car’s description.

How does this relate to undocumented individuals seeking abortions in Texas? The interpretation of my hiking group’s behavior as “suspicious” was enough to prompt border patrol agents to stop us and search our belongings. Moreover, for people traveling from parts of West Texas to New Mexico to access abortion care, the likelihood of coming across a border patrol checkpoint is moderately high. There are several border patrol checkpoints in the southern part of New Mexico, one of which is directly in route to Albuquerque, where two out of the three abortion clinics in New Mexico are located. The third clinic is located in Santa Teresa, New Mexico, an area right next to the border with Cd. Juarez, Chihuahua.  This clinic would also be the closest stop for people in west Texas who are under 10 weeks pregnant. Furthermore, the Governor of Texas, Greg Abbott, is also notorious for his anti-immigrant sentiments and the policies he has put in place to target immigrants. Many of these policies make it dangerous for undocumented immigrants traveling within the state. While an immediate change to the 100-mile zone is unlikely to happen soon, there are several ways that we can support undocumented individuals. For example, supporting organizations that fight for immigration rights can connect individuals with services to help them. Additionally, supporting abortion funds in this area can be an immediate way to help those in need of abortion care.