How to Be an LGBTQ Ally (Without Being a Jerk) 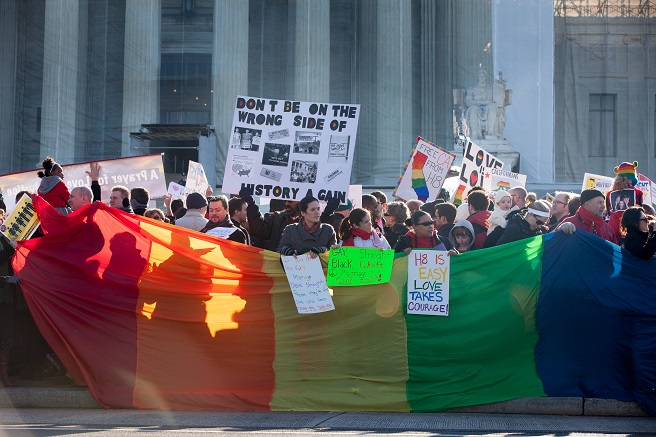 As the month of June comes to an end, I took a moment to think about what I did this month to celebrate Pride, a month dedicated to honor the 1969 Stonewall riots in Manhattan, and I did what allies to the LGBTQ community sometimes fail to do: I took a seat.

Pride Month was established in 1995 as a month to honor the 1969 Stonewall riots, which was a tipping point in the Gay Liberation Movement. It’s a time where friends, families, organizations and institutions nationwide take a moment to recognize the impact that LGBTQ individuals have had on our history. It is not however an opportunity for straight people to hook-up, contrary to what thoughtless and offensive articles might say.

Earlier this month, the website Brightest Young Things published an incredibly offensive article titled, “Straight Guy’s Guide for Getting Laid at Gay Pride.” (No need to link to the article, trust me it’s as dumb as it sounds).

Newsflash to those who identify as a heterosexual, Pride is not for you. Yes, it is an opportunity to celebrate the accomplishments and impact the LGBT community has had on all of our lives, and for some the opportunity to shamelessly wear glitter and neon colors without getting the side-eye. But primarily, Pride is for those who identify as queer to live, breath, dance and sing in merriment. As a dear friend of mine put it so eloquently, Pride is not for “random ass heterosexuals who don’t know how to be good allies.”

While this isn’t an exhaustive list by any means, below are some of the ways to be an LGBT ally, without being a jerk.

1. Listen and then listen again. Being an ally means listening to as many voices of those we’re trying to advocate for. Listening to a diverse group of voices from marginalized identities allows you to better understand the core issues impacting their communities. If we’re going to publically and actively advocate for the LGBTQ community then we need to know what we’re talking about.

2. Being an ally is an action. Being an ally requires constant action. One of the most important things about being an ally for me is not taking a break. Queer people have no choice but to resist bigotry and part of my privilege being heterosexual is having the choice to respond. So I choose to always respond.

3. Educate yourself. Standing in solidarity with a marginalized community means knowing the issues that are most important to that community and it’s up to you to educate yourself. Educating others about the ongoing struggles facing the queer community is a full time job and not their responsibility. Read up!

4. Create safe spaces and then shut up. When the opportunity presents itself to create safe spaces for the LGBTQ community, help to facilitate and then sit down. It’s a safe space for LGBTQ community—not you. Know when to step back and encourage others to speak up. For me, that includes volunteering for organizations like the Women’s Information Network (WIN) who aim to provide open dialogue around issues of power and privilege. Later this week WIN is hosting one of its signature events, including a dinner focused on the challenges facing queer women of color working in the progressive movement. I will assist in facilitating the conversation, not leading it. Again, know when to step back.

Sophia is a civil rights and social justice advocate who is passionate about issues that impact communities of color and women. Sophia works as the Coordinator of State Policy & Partnerships at Advocates for Youth and she also currently serves as the Network Director for the Women’s Information Network (WIN).