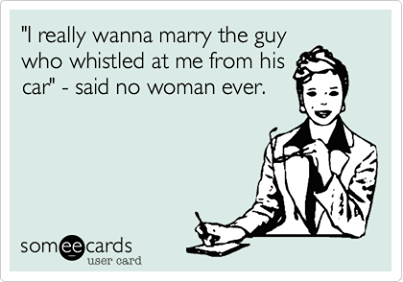 The issue of street harassment and catcalling has been one that’s been making the rounds in the media, particularly social media. Several videos and articles, including this video, have gone viral. Showing the numerous instances of street harassment faced by one woman walking down the street in New York City, it shows that the experiences of some women and their interactions with strangers can be unsettling or even frightening at times. My fellow URGE blogger Caitlin also wrote about this video last week, talking about the possibly unintentional but totally real racial bias presented in the video.

Since this is an issue that nearly all women face in some form, and also since there is a significant portion of men who don’t understand this issue, I thought we should have a discussion about street harassment and how not to do it.

I should start by saying that the reason I believe many men do not understand this issue is because of the things I read in articles like this one, and in reading the comment sections on many articles or videos. Hint: NEVER read the comments! Some people seem legitimately confused over the difference between yelling at a woman across the street and simply being friendly to your coworkers in the morning.

So, to clarify this whole issue, we must first begin with a definition. “Street Harassment” can be defined as “any unwelcome words or actions by persons, known or unknown, in a public place, which are motivated by sex, gender, race, sexual orientation, or ability, and serve the purpose of soliciting interaction, exerting dominance, affecting behavior, or invading personal space.” This is my own definition, taken as bits and pieces from the many definitions provided here. As you can see, street harassment can happen in any public place, and not just on the street. Also, you can see that it can be motivated by things other than sex or gender. LGBTQ+ individuals and are shown to be affected disproportionately by this, as are people of color. This is because, at its core, street harassment is not motivated by sex as much as it is motivated by power.

So, for us men, I have devised a simple 3- part plan for avoiding participation in street harassment.

1. Be conscious of other people’s feelings toward your words or actions. As men, we are not used to being sexually commodified or being undermined in public spaces. We don’t understand how it feels to go through these experiences that a majority of women, and those who belong to other oppressed groups, have gone through. So, it can be difficult for us to put ourselves in their shoes to understand why something as simple as saying “good morning” can be harassment. But what is said doesn’t matter. What the intention is doesn’t matter. What matters is how that person feels about any comment we might make.

2. Taking others’ feelings into account, adjust your actions accordingly. Make an effort to not talk to someone who might see your words as unwelcome. Try not to put yourself in a position where your actions can be perceived as threatening.

3. If you are around someone else that is engaging in behaviors consistent with street harassment, or really any sexism for that matter, make sure they hear from you that it’s not ok to do that. Especially if you are in a group of friends, one person saying “Don’t do that” can make a big difference in behavior.

It is really that simple. The first step is being aware and conscious of other’s feelings, the second step is changing our own behavior accordingly, and the third step is holding others accountable to the same standard.

If you think it is “unfair” that we, as men, should have to police our own actions and interactions to avoid even the possibility of being perceived as harassment, then you must not have considered what it feels like to be on the other end of that harassment. And if being considerate of others is all it takes to not make others feel that way, that is a very small price to pay. And if anyone is to blame for this “burden” placed on us to not offend others, it is people like those in that video that make women or other marginalized groups feel unsafe in public, not the advocates trying to fight harassment.