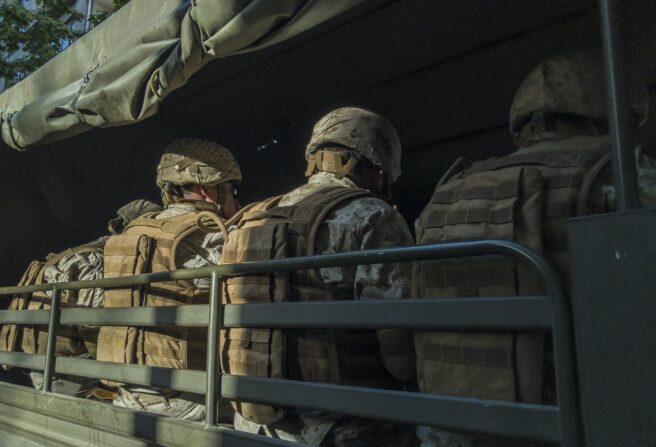 A woman dropping bombs on Brown countries is not equality, no matter what the Biden Administration says.

On March 8th of this year, International Women’s Day, President Biden announced the historic nominations of two female generals for four-star commands. Air Force Gen. Jacqueline Van Ovost and Army Lt. Gen. Laura Richardson became the second and third women, respectively, to lead combatant commands in the history of the United States Armed Forces. Their nominations were made after being delayed due to fears that previous President Trump would not approve of them because they were women. Biden’s decision to go through with their nominations was lauded by many liberals as a win for gender equality and for the advancement of women in Western society.

On the surface, women occupying important, decision-making roles could be seen as a good thing. However, most recently, the U.S. military has both been complicit in, and participated in military campaigns that have killed innocent women, children, and families across the world, and has made it harder for many people living in occupied countries to raise their families in safe and healthy communities. Additionally, during times of war, women and children suffer disproportionately, making up the majority of war refugees and being at higher risk of experiencing rape, sexual torture, and sexual exploitation by aid workers. Women occupying positions of power in the military of the most powerful empire in the world is not feminist and is not good for women. The inability or refusal of Western liberals to understand that, makes them complicit in and responsible for much of the oppression of women globally.

There is rarely a more glaring example of Western liberals using the advancement of a Western woman to perpetuate gendered oppression than Secretary Hillary Clinton being voted as the 2016 Democratic nominee for President of the United States. Clinton, even in her own party, was seen as a hawk and had a long and very public history of having a foreign policy ethos that emphasized military intervention. Despite a strong challenge from Senator Bernie Sanders, who had an unorganized, if not murky foreign policy platform that stressed anti-war and greater diplomacy, Clinton had the majority support of her party. Much of that had to do with Donald Trump, a racist, a misogynist, and an alleged rapist, who did not believe in democracy, being chosen as the Republican Party nominee. His nomination caused many liberals to refuse to look critically at Clinton’s policy positions. However, that is no excuse for Western liberals to overlook and ignore the experiences of women living in Afghanistan and Libya, who experienced firsthand the violent, interventionist policies that Clinton supported during her time as Secretary of State and to then uncritically support a woman whose feminism stopped at the U.S. border.

Many liberals were excited for the potential of a woman becoming President for the first time in American history. But if they refuse to look holistically at the impact the women they support will have, if they refuse to include non-Western women in their feminism, if they refuse to understand how women globally, especially those who live in war-torn countries will be affected by American foreign policy, they will continue to contribute to the oppression of women worldwide.

Some may disagree and say that the advancement of women anywhere is a victory for women everywhere. But that perspective can only be true if we erase the existence and experiences of women who live in non-Western, non-white, and historically poorer countries.

Is a woman leading combat commands that may go on to bomb civilians or commit war crimes a victory for the women living in the countries that are getting bombed? Was Michèle Flournoy’s ascension to the highest-ranked woman in the Department of Defense’s history a win for women living in Libya, while Flournoy fought for U.S. military intervention there? Was Susan Rice’s defense of Israeli human rights violations during her time on the U.N. Security Council a win for Palestinian women living under brutal military occupation?

They were not, and to claim otherwise means that you are prioritizing the increased privilege for an already privileged few women over the health and safety of all women.

The status quo of what feminism and equality for women and gender minorities look like needs to change. When we hear about women in Western countries ascending to certain positions of power for the first time, we need to think critically about what it will actually mean and ask ourselves: Is it good for all women or just privileged, white, Western women? It is upon all of us to start centering the voices of the most vulnerable among us in our decision-making and make sure that we are committing the least amount of harm possible. We have to care about the women outside of our immediate community and we need to make sure that we set a higher standard for what is considered to be feminism.