Is This My Land Too?

“Is this my land too?” periodically comes up in many conversations surrounding racial and civil liberties.

We are constantly bombarded with scenarios that illustrate the hazards of being black and demanding basic human rights across America. Recently, Solange Knowles attended a concert in New Orleans called Kraftwerk, a German electronic and pop music band, to expose her eleven-year old son to new experiences. When her favorite song came on, she stood up to dance like any other person would whenever their song comes on at a music concert. However, her movement and passion in the atmosphere upset a group of white women who yelled and threw half-eaten limes at her. 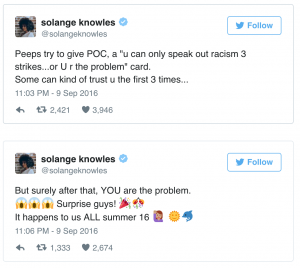 This eerie feeling of discomfort with Solange and her joy was brought on by white privilege, which demanded that her body sit still and act “respectable” for the comfort of others around her in that space, even though she wasn’t disturbing anyone. This is the same discomfort that makes the police feel threatened by black people in public spaces even if they are not doing anything wrong. Some examples of such moments include young boys playing with toy guns or a young girl sleeping in her bed. As Solange points out in her written response to the Kraftwerk incident, the media has a hard time contextualizing black women and men as victims every day, even as they are losing their own lives. One such moment was when a hospital refused further services to a black woman, even when she said that she suffered respiratory problems. Sadly, this refusal to provide basic and necessary health car resulted in her death.

“Is this my land too?” has become a paradox. How can black people exist as hypervisible in a land where they are not wanted?

It seems as if the black body has been formed into a state of hypervisibility. Actions are thwarted onto scales that strip black people of their innocence. Black women, echoing their right for freedom of expression, are stereotyped as angry and aggressive. Let’s not forget about the group of black women who were kicked off the Napa Valley Wine Train for being “too loud” earlier this year. Or about Imani Cezanne, who was banned from an American Airlines flight after asking why a non-English speaking person cannot sit by the Exit window. Most of all, let’s not forget how the media chooses to cover these issues and occurrences. Reporters pose questions such as: “Were you too loud?” “Did you seem irritated by being given the same answer multiple times?” “Did your body language pose a threat to those around you?” The list goes on and on, but the result is always the same: blatant racial discrimination and a denial of basic human rights that restrict black people from coexisting in white spaces.

As Solange points out, we belong. This land belongs to us, too.