Jezebels, Mammies, and the Dehumanization of Black Women 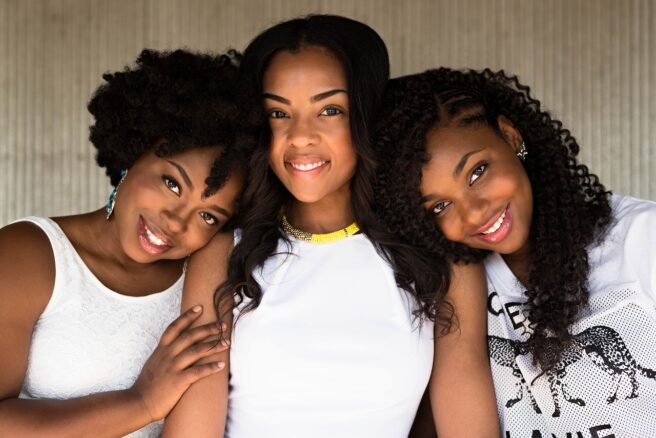 Popular culture informs much of our understanding of the world and the people around us. For better or for worse, we rely on stereotypes—created from both personal experience and depictions in media—to interact with society. This power can often be used for good by introducing majoritarian individuals to the experiences and existence of marginalized people. Too often, however, popular culture’s influence only serves to perpetuate racist, bigoted stereotypes about marginalized people. This is especially true in how Black women are depicted in the media.

From movies to tv shows, music videos to theatre, depictions of Black women tend to fall into one of two categories. The first, the hypersexualized jezebel, can be seen in portrayals of the sexually active, sassy Black woman often used as a foil to a more mild-tempered and reserved white counterpart. Light skinned or thin Black women are most often stereotyped in this way. For example, in the CW show Supernatural, the character Portia, a Black woman, serves as both the familiar (essentially servant role) and lover to a white male witch. Her presence in the show is just one example of the way Black women are used as sexual fodder, frequently included for the sole purpose of satisfying the white gaze. In addition to the inherent complications of the nature of her relationship to her witch, Portia also frequently appears as his literal pet dog throughout the show. This dehumanization and commodification of Black women’s bodies has direct ties to slave-era attitudes towards Black women.

The most infamous example in history of this is Sara Baartman. Born enslaved in South Africa, Sara was brought to Europe in the early 1800s and quickly put on display in London for the explicit benefit and interest of white people. White Europeans gawked at her features and were able to examine her genitals for an additional fee. Her nickname of “Hottentot Venus” further illuminates the link between her body as a Black woman and the idea of sexuality and fertility. The word “Hottentot” was a slur used for the Khoi people of South Africa; “Venus” is an allusion to the Roman goddess of love and fertility. Sara was exploited and sexualized by a white society that viewed her as less than human. The treatment of Black women was no different in the United States, with many Black enslaved women suffering from sexual assault or rape at the hands of white slave owners. With both the notion that Black women are inherently sex-crazed beings and the view of Black people as property, white men have used slavery and its progeny to perpetuate a culture that aggressively sexualizes Black women. 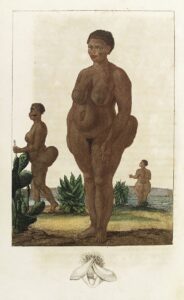 The drawing depicts an African woman in the foreground and two African women in the background. All three women are naked and have large breasts and buttocks.

The other tragically common depiction of Black women in the media is the mammy. This character is presented as a nurturing mother figure, typically overweight and dark-skinned, with little depth past being “the help.” An example of this is seen in Hattie McDaniel’s portrayal of the aptly named character Mammy in Gone with the Wind. Mammy is a house servant, playing a maternal role in the main character Scarlett’s life. Despite the important role she has assumed within the household, she is still treated as a second class citizen. The mammy, like the jezebel, has its roots in the treatment of enslaved Black women and their labor. Many enslaved Black women did domestic work inside the house ranging from standard cooking and cleaning to child-rearing and wetnursing.

The polar opposite of the jezebel, the mammy is chaste and desexualized in most, if not all, contexts. At first glance, this may seem preferable to the constant sexualization experienced by the jezebel. In reality, being denied one’s sexual autonomy is just as damaging as being unwantedly sexualized. The mammy stereotype remains pervasive in our current pop culture; Octavia Spencer, for example, is a talented actress, but attention should be called to the kind of roles she is offered and depicts as they often perpetuate the idea of the Black woman as the help. 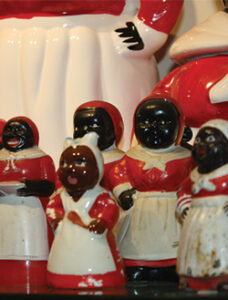 The image depicts several Mammy dolls. All of the dolls feature very dark skin, a red shirt, and a white apron. Some of the dolls have exaggerated red lips.

While these stereotypes manifest in different ways, both stem from a desire to police the sexuality and body of Black women. Black women are depicted as either seductive jezebels, in an effort to make their sexuality their entire identity, or relegated to the soft, motherly mammy role in which one’s sexuality is non-existent. Neither stereotype affords Black women the agency to make their own sexual choices. Stripping Black women of the control of their own bodies and sexualities perpetuates their dehumanization and diminishes them to one-dimensional caricatures.

Knowing that these stereotypes still exist is only the first step in undoing the harm they have caused Black women. It is important to advocate for diversity in media and pop culture, from the CEOs of television networks to the choice of actors for a production. In an era where almost anything is available to stream instantly, it’s imperative we vote with our dollars and refuse to support modern works that continue to perpetuate these harmful tropes. Insecure and Us are examples of the nuanced characterizations that Black women deserve. Black women are owed depictions of softness, strength, complexity, and boldness that neither the jezebel nor the mammy stereotype allows. Support shows and movies that paint Black women as dynamic individuals.