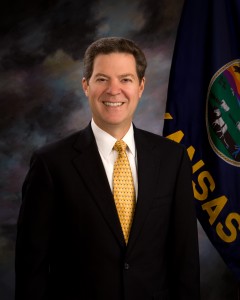 From the Office of the Governor

For a state that is struggling with a historically significant budget crisis, Kansas Governor Sam Brownback and his supporters in the legislature sure do know how to gamble tax dollars on actions and legislation that are federally prohibited. In his state address last week, Governor Brownback announced that he was going to follow through on his promise to remove Medicaid funding from Planned Parenthood of Kansas and Mid-Missouri (PPKM).

According to his letter to the Kansas Secretary of Health and Environment, Governor Brownback’s direction to end Medicare funding to PPKM was “based on their affiliation with the national Planned Parenthood Federation of America and other information provided by [the department].” While the letter is vague in what exactly that information was, it is presumed that the information was that the Overland Park center, the only Planned Parenthood facility in the state that provides abortion services, was under investigation. This investigation was started just to ensure that the facility was not participating in the controversial, and also illegal in Kansas, fetal tissue donations.

Just a few days later, Kansas Board of Healing Arts released the results of the investigation and found that the Overland Park location doesn’t participate in fetal tissue donation. Elise Higgins, a spokesperson for PPKM and URGE board member, has suggested (and is probably right) that Governor Brownback’s actions are “an attack on women, an attack on preventive health care and just an attempt to distract Kansans from the mess that Governor Brownback has made of schools and the economy here in Kansas.”

Ultimately, taking away Medicaid sourced funding is a waste of time and tax money that will drive the state deficit even higher. There have been six states already who have attempted to shut down their Planned Parenthood facilities by cutting Medicare funding who are now facing litigation and spending tax money on legal fees.

In a 2011 attack on PPKM, the Governor redirected federal Title X funding, to other health centers. This caused one of the Planned Parenthood clinics in Hayes, the only clinic that provided services to women in the entire Western half of Kansas, to close, and cites his luck with the litigation against that action as the source of his confidence of being able to win any legal action against his latest move to limit reproductive health services. Governor Brownback is gambling tax money, something that Kansas is a little short on right now, somehow thinking that he can win where other states have failed.