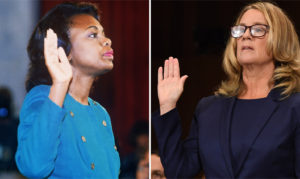 It has been a year since Dr. Christine Blasey Ford appeared in front of the Senate Judiciary Committee, testifying to the panel and the millions of people watching the televised hearing, that the then-Supreme Court nominee Brett Kavanaugh sexually assaulted her in the summer of 1982 when she was 15.

I vividly remember the morning of Thursday, September 27th, 2018. It was a pleasant day; the fall season was just setting in. I started listening to Dr. Blasey Ford’s testimony while doing work. I listened to her quiet and gentle voice recounting her experience, stumbling over words sometimes. At one point I switched the browser tab over and started watching the hearing. I watched from that moment on to the end, feeling glued to my seat, unable to look away.

A year before Dr. Christine Blasey Ford’s decision to come forward to this very public stage, the #MeToo movement gained unprecedented momentum following the Harvey Weinstein sexual abuse allegations. Tens of thousands of people disclosed their stories of sexual harassment and assault responding to the hashtag on social media, causing the hashtag to trend in at least 85 countries. From a hashtag on social media, the #MeToo movement has transformed into a powerful global grassroots social movement, demonstrating the prevalence of sexual assault and harassment and achieving tangible progress towards gender equality around the world.

A year after Dr. Christine Blasey Ford’s testimony, its impact, along with the impact of the #MeToo movement, still awaits further investigation. Meanwhile, of every victim or survivor who talks about their experiences in courtrooms, in newsrooms, and conversations- their stories are situated against the backdrop of a collective reckoning brought forth by these events.

This reckoning is long overdue. Before Dr. Christine Blasey Ford, countless women had come forward with their stories, calling attention to the pervasive problem of sexual harassment and sexual assault. Among these cases, one had striking parallels to Dr. Ford’s.

Nearly 30 years ago, Professor Anita Hill came forward to a Senate Judiciary Committee made up entirely of white men, bringing allegations of sexual harassment against her then supervisor at the Equal Employment Opportunity Commission and SCOTUS nominee Clarence Thomas. During the hearing, she faced an enormous amount of skepticism- the male senators, who were unconvinced of the relevance of Thomas’ alleged behaviors to his fitness as a nominee to the Supreme Court, questioned her credibility and motivations. The hearing turned out to be more comparable to a grueling public interrogation of Hill.

Compared to Blasey Ford, Hill seemed to have endured more isolation during and after her testimony. Besides the fact that the #MeToo movement did not exist back then, another key difference between these two cases is the racial dynamics. As Professor Hill pointed out in an interview in 2017, race is an important component in discussions of sexual harassment.

From the chattel slavery system to the Jim Crow era, violence against Black women’s bodies is rarely deemed as criminal or punishable. Used by European imperialists to justify sexual violence against Black women, hypersexualized depictions of Black women can be traced as far back as the mid-1500s. Despite the abolishment of American slavery, these intentionally destructive misrepresentations continue to adapt and manifest themselves through political and cultural landscapes.

The double-barrelled combination of racism and sexism disadvantages Black women on multiple levels. They are less likely than white women to report crimes of sexual assault. For every Black woman that reports her rape, at least 15 Black women do not report their experiences.

Not coincidentally, the #MeToo movement was founded by Tarana Burke, a Black woman, back in 2006. Burke intended to use the phrase to empower sexual assault survivors by centering their experiences and narratives. She continues to highlight the need to discuss untold stories of sexual assault of women of color, whose voices have largely gone unnoticed.

It’s clear Burke’s movement continues to be necessary especially when you review cases like Kavanaugh. Just like Clarence Thomas, Brett Kavanaugh was eventually confirmed to a lifetime appointment on the Supreme Court. Superficially, nothing changed because of Professor Hill’s or Dr. Blasey Ford’s testimonies. But it wasn’t for nothing. Through them, I saw the power of truth-telling, and what it looks like to stand in your integrity and tell your truths. Their coming forward helped me do the same.

In The Transformation of Silence into Language and Action, Audre Lorde wrote, “ My silences had not protected me. Your silence will not protect you. But for every real word spoken, for every attempt I had ever made to speak those truths for which I am still seeking, I had made contact with other women while we examined the words to fit a world in which we all believed, bridging our differences. And it was the concern and caring of all those women which gave me strength and enabled me to scrutinize the essentials of my living.” This has been my experience.

Thinking of Christine Blasey Ford and Anita Hill, I’m once again reminded that truth-telling is pivotal in the fight against sexual violence and that believing and supporting survivors starts with listening to our stories. Meanwhile, I’m also reminded to pay attention to the lived experiences of women of color, especially Black women, when I think and write about gender issues. They’re more likely to suffer greater consequences when challenging power, and their contributions are more likely to go unnoticed.