Mansplaining: from Suffragettes to the Tampon Tax 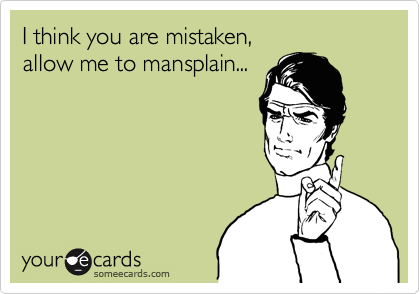 I don’t surf the internet looking for articles that make me angry. I really don’t. Most of the time I don’t even give into the temptation of an obvious click-bait article, but seeing a non-Onion article regarding a meninist and the tampon tax, I gave in and let myself see what was happening in the new viral outrage.

There is a full list of the things I expected from the article, but what stood out was what I didn’t expect. Seeing a man my own age make comments about how women on their period should simply hold in their uterine lining until they make it to a restroom, making the tampon tax in London completely irrelevant as a topic, baffled me to the point of wondering whether or not it was a serious case of ignorance, or a unique attempt at trollings.

In the end, I decided it didn’t matter. Whether Ryan Williams and his tweets were serious, it does remind me that there are men who do believe that they know a uterus better than someone who has one, even if the closest thing to a biology degree they have is an assignment from an 8th grade health course.

So, while I can go into the science of how the menstrual cycle works, giving him the biology lesson he should’ve had in middle school, that’s not what I want to highlight in this article. Ryan Williams is a grown man, and he has all the resources to learn for himself how he made a mockery of the sexual education system in his area. Instead, I’m going to take this time to highlight and even bigger problem, one that supersedes him and the tampon tax that got him on this train of ignorant thought: mansplaining.

Ryan Williams, your posts and attempt at a movement is the epitome of mansplaining, and that is the reason why you’ve been flooded with attempts to correct your misstep. If you don’t already know, mansplaining is defined by Dictionary.com as “to comment on or explain something to a woman in a condescending, overconfident, and often inaccurate or oversimplified manner,” In other words, taking a high school degree and trying to jam it into a doctorate shaped hole.

By trying to explain to those with periods to simply “hold it,” as if it were the same as the reflex we learned as we left the phase of diapers, you’ve miraculously managed to hit all of the qualifiers in the above definition right on the head.

What baffles me about the situation in front of us is now the question of whether I should blame you for the obvious — and nearly comical — unawareness you’ve decided to paint as the truth, or the world that makes acceptable for you to sling whatever fairy tales you have bouncing around the space between your ears as expert testimony. In all honesty, maybe it’s a combination of both.

What doesn’t baffle me in the slightest, and what inspired me to write an entire article about the few tweets of yours that went viral, is that your actions reflect a larger problem. In my own experiences, I’ve seen politicians try to argue what is and isn’t real rape, and how that supposed difference can be the deciding factor for a pregnancy. I’ve seen people argue how government interference in the process of abortion is necessary, allowing the mandating of waiting periods and counseling sessions, due to the belief that we’re inherently not sure of our choices. I’ve seen women of color get hurt from mansplaining, as well as it’s just-as-unnecessary cousin, whitesplaining.

It’s on TV, it’s in the news, it’s on my campus, and now it’s on my facebook feed. The more aware I am of it’s existence, the more it turns into a terrifying movie monster sensation and intensifies it’s presence. Your tweets are just another tally on the running list of encounters I’ve had with it, and it’s the tally that’s prompting me to say enough.

While gender doesn’t determine the likelihood of being a pompous jerk that injects themselves into conversations, mansplaining is unique with it’s background with sexism. What also makes it special and different from general ignorance is the frequency it’s used to shut down an important conversation that affects oppressed women.

One of the earliest examples I could find is a piece from 1903 by Lyman Abbott, titled “Why Women Do Not Wish the Suffrage” and explains in detail why the suffragettes don’t really want the right to vote, and why it would even be detrimental to society if they received it. Now, it’s being used to dismiss the very real criticisms of a tax on a product that women need as a necessity, not a luxury.

It’s a full circle. Every instance of “-splaining”, whether it’s mansplaining, whitesplaining, and able-splaining follows the same suit, and will continuously do so until we find a way to put a stop to it. Whether we find a method to do that by acknowledging, retorting, or ignoring, it’s never going to stop being an issue.

Ryan Williams is simply one man whose mansplaining went viral; there are still many more instances out there that show a scary dynamic in the conversations of equality. Sometimes, it’ll result in an Onion-esque article that might get a good chuckle out of the general population, but other times it’ll be as harming as the intent behind it, silencing the people who need to speak most about something. The day this stops being the norm and we put the truly qualified and experienced people at the forefront of the conversation will be the day we can truly continue the discussions at hand.

P.S. Ryan, just to reiterate, that’s not how biology works.