#METOO, I Was Twelve 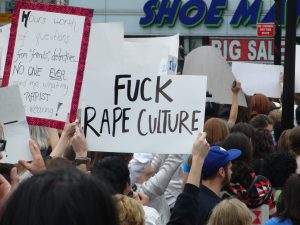 Miyam Bialik wrote a piece for the New York Times in response to the allegations against Harvey Weinstein. The Weinstein Company mogul has been accused of sexually assaulting and harassing dozens of women throughout his career as a powerful Hollywood producer. In Bialik’s piece, women’s behavior and appearance are connected to the potential harassment they could be victims of. In her piece, she states that because she dresses “modestly” and doesn’t “act flirtatiously with men as a policy,” she has not had a bad experience with powerful men in Hollywood. The issue with Bialik’s argument is that it places responsibility on women, blames victims, and excuses the behavior of powerful men.  It is important to talk about hyper-sexualization, objectification, and exploitative Hollywood culture. However, Bialik does not address these issues in regards to agency, toxic masculinity, or racism. Instead, her words blanket over these nuances.

It is all too common to see the victim blaming narrative after a scandal like Weinstein’s. It is also no surprise that Weinstein’s non-apology uses the fact that he “came of age in the 60’s and 70’s, when all rules about behavior and workplaces were different” to excuse his behavior. Sexual harassment and assault have always been violent and prevalent, no matter the decade in question. In response to the Weinstein scandal, the hashtag campaign #MeToo became a platform for women to talk about the commonality of sexual harassment. Through this campaign, we are able to see the magnitude of the problem. Shortly after the Weinstein scandal, Twitter confirmed that the hashtag had been used nearly half a million times. Women, no matter how they dressed or acted, found themselves in dangerous situations.

I was a child when I first experienced sexual harassment. I did not understand why men would shout nasty things at me from across the street. I felt like it was my fault for walking by myself, for wearing a tight shirt, or even for wearing lip gloss. From a young age, I was made to feel like it was my fault that I had to withstand the perversion of older men on a daily basis. Later, when I was in high school, male teachers made advances towards me. Teachers looked up my skirt, touched me inappropriately, and commented on my “attractiveness” without regard to my young age. They were in positions of power, with access to countless, vulnerable young girls. As much as I wanted to believe that my efforts at respectability and modesty would have protected me from men like that, it was never the case. After I graduated, one of the teachers that made advances at me was charged for statutory rape due to a long-term illicit relationship with a 16-year-old student. Predatory men aren’t just hotshot Hollywood producers; predatory men are at our schools, within our families, and in our neighborhoods. Predatory men don’t care about a “perfect 10,” revealing clothing, or plastic surgery. Predatory men do not care about the efforts women make to protect themselves, or the fact that many of their victims are children.

#MeToo uplifts the voices of women who have experienced sexual harassment. It gives us insight at the depth of the problem at hand. Sexual harassment, assault, and rape are disgusting acts of violence, and nothing a woman does or wears warrants it. Eradicating rape culture and addressing toxic masculinity are fundamental to reproductive justice. If we are intersectional and empathetic in our approach to discussing these topics, we can shift away from the idea that women have to essentially give up their life in order to protect themselves from sexual assault.