My Experience as a Latinx Woman in Sports 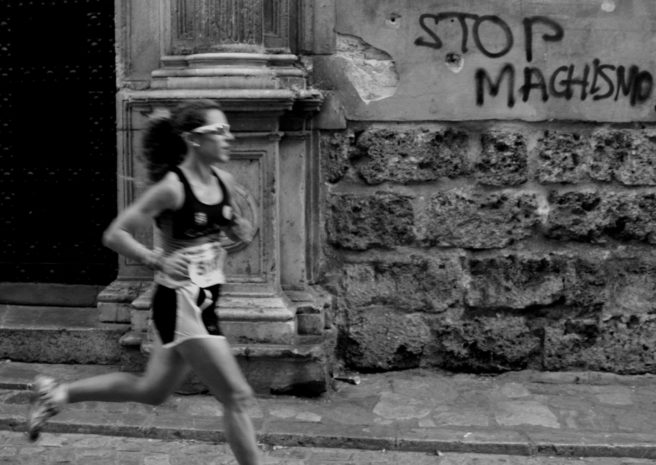 I have played soccer for 19 years of my 23 on this planet. I even went on to play for my University’s women’s soccer team as a goalkeeper all four years. The University of Texas Pan-American (now UT Rio Grande Valley) are in the NCAA Division 1 Western Athletic Conference. I was also a part of the “Student Athlete Advisory Committee” since my sophomore year of college. SAAC is “the voice of the student athlete” and I was President of my institutional and conference SAAC. We discussed institutional, conference, and NCAA policies and issues. I oversaw eight school across the United States. As president of the WAC SAAC, I ensured student athletes accurately understood and relayed policies and their consequences to their respective student athlete body and administration. I also understand the rules of the game as a Referee, as I have been one for nearly 11 years. The point is I have experience as a Latinx woman in sports and as an athlete that understands the inner workings of how sports, sport teams, and sports institutions operate. 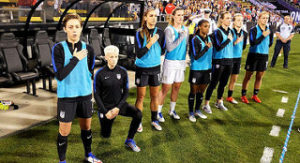 Before we scratch the surface of the many disparities women face in sports versus men, competition itself needs to be addressed. “Academics” collectively find competition and sports beneath them. I know people that pride themselves on not being competitive (weird?). Competition, sports, and athletes are widely portrayed as dumb and overly aggressive. Athletes making a statement on any platform like Colin Kaepernick, women’s soccer badass Megan Rapinoe, or Lebron James are discouraged from being “more than an athlete”. Competition and sports should be celebrated. They are healthy, fun, and can provide a great, accessible, platform for change for huge audience bases around the entire world. 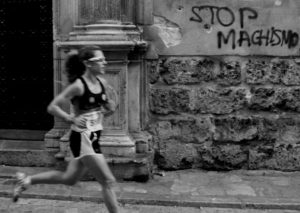 Machismo and stigma prevent so many women around the world from pursuing their athletic ability. Reinforcing fake gender roles isn’t good for anyone’s mental toughness. It has been proven that when men do bad in competition they think it is because of lack of effort. When women do bad in competition, its widely perceived as a lack of ability, which is bonkers. Luckily, I grew up in a household that loves sports and had support from all my friends and family to play. Even when I trained with boys or men, they still believed in me and treated me the same. This is not the case for everyone, especially Latinx people, though I am speaking from my own experience as a Tejana. I know girls that were forced to secretly play sports in and outside of school because their father believed sports are for men. Another excuse is that sports would “man-up” a girl and “turn them gay”. I knew that was some backwards thinking but growing up and hearing this weird, made-up stigma influenced my teammates and I, infuriating some, making most uncomfortable, and created some outright bigots. I’ve had multiple teammates tell me they think one of my lesbian teammates stare at them in the locker room. No one cares enough-put on your practice gear, Suzy. There is a lot of homophobia in sports and this needs to change. Sports are for everyone.

As sports become more competitive and demand more time, less girls continue with sports. Culture isn’t always the main factor that girls drop though. Sometimes the game itself can be frustrating and misogynistic. Referees literally call the game differently for men and women, especially for soccer. As a FIFA and UIL certified referee, the rules are technically the same. In the pre-game meetings with my fellow male refs, they have literally said that girls shouldn’t fall and to call the game differently by handing out more cards and calling more fouls. These men truly believe that women are weaker than men and do not deserve to be given the same level of respect as an athlete. Being reffed by these men disgust me. The rules are the same and the games should be called the same. We are tough. 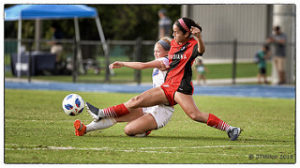 Two girls going in for a tackle

Money is the main reason that it is hard for people to be successful in high level soccer. As Hope Solo said “Soccer is a rich, white kid sport”. The one time she has ever said anything useful. To continue playing soccer at a higher level you need to play in expensive leagues out of town, pay for trainers, and travel constantly for games, camps, and tournaments. People in the RGV are forced to go through the checkpoint which is scary for some. This makes family support hard to find amongst people in the poorest area of the country. All throughout high school, my parents would stuff around 10 of us in a suburban and that’s how we’d travel to most of our games. My “HOME” games were in San Antonio- a 4 hour drive away. This is still the case for club teams today. The soccer boards from different teams refused to meet us in the RGV because it’s “dangerous”. 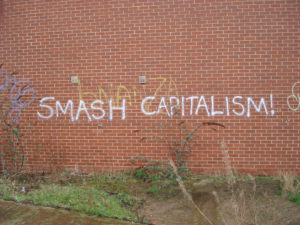 Capitalism refuses to include the poor in expensive sports

It is also important to mention fiscal barrier that the NCAA places specifically on Transgender women. NCAA doesn’t allow transgender women to play on the women’s team until completing a full calendar year of testosterone suppression therapy. Barebones, this costs at least $1500. The NCAA policy states that trans women but undergoing hormone therapy may not compete on the women’s team- just the men’s. It states that trans men can play on either the men’s or women’s team. Athletes not undergoing hormone treatment may participate in “sex-searated sports activities in accordance with his or her assigned birth sex.” These policies on school sports trickles down as well. A trans boy in a Texas high school has asked repeatedly to wrestle in the boys division, but Texas public high schools require athletes to compete under the gender on their birth certificate. These policies creates more financial barriers and forces folk to identify themselves as their assigned sex at birth is dangerous. This kind of policy misgenders and outs athletes.

Women are sexualized from a young age and this transfers onto sports teams as well. People criticize girls hiking up their shorts or tops and sexualize athletes in tight gear that are just trying to perform. As SAAC President, one message I had to relay to the women at my school is to dress “modestly” during banquets because it made my former Athletic Director, Chris King, “uncomfortable”. We are not taken as seriously as male athletes, and that is clear from directly hearing that a grown ass man can’t handle looking at his student athletes in business casual without sexualizing them. This is NOT the case at all schools whatsoever, but at my school UTRGV, we had sexual harrassment talk that was completely inappropriate. The men and the women had separate talks which is already wrong. The speaker told the women that they were in danger if they were alone with a man, drinking in a skirt. He basically told the men that they shouldn’t have sex with anyone until marriage because they would be accused of rape. When my Senior Woman Administrator, Farrah Manthei head I was upset by this talk, she called me in to say that the man wasn’t wrong. My blood was boiling when I found out he was paid real U.S. Dollars to give this speech at my school. There is a recording of this talk that is public to everyone if requested. 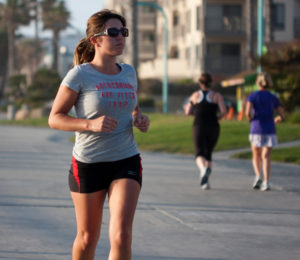 Training alone, a run/bike/hike/ or trek to the gym can be dangerous for women. Joggers are often easy victims for predators lurking about. As a highschooler on the cross country team, a car literally parked across the road and took pictures of my team and I. When I told a friend I felt safer running in my neighborhood compared to his, he was in shock. He never had to consider safety as an issue when running or biking. As a woman that runs or bikes alone, I am prepared to defend myself. This shouldn’t be what I am worried about. This is a testament for athletic women that still have the determination to train alone. Women in sports need to be applauded for showing up through it all. They need our support and deserve our admiration. Thank y’all for constantly inspiring the little girl in me that wants to break the ego of all men. Continue kicking ass.