November 16th was “Thanks, Birth Control” Day and as such, reproductive justice organizations flooded their timelines with tweet after tweet of birth control users everywhere pledging their undying love for what every knows and loves as — birth control. And, although the day was a ray of positivity after a week of what many saw as despair, I still feel strange about the entire thing.

“Thanks, Birth Control” Day, known online as #ThxBirthControl, was started by the National Campaign to Prevent Teen and Unplanned Pregnancy. When this information came to my attention, I felt an instant irony. As the product of an unplanned teenage pregnancy, there are many reasons in my life to “thank birth control” and yet, here I stood the exact opposite of everything the day hoped to accomplish. 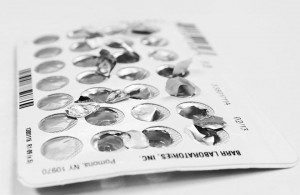 As a pre-teen, I became acutely aware of the fact that my parents were unlike all the others that surrounded me. They were young and black and navigating their twenties when I was an adolescent. It was then that I also became secretly obsessed with never becoming pregnant before marriage. This turned into an obsession in early high school with purity rings and sexual avoidance. It was easy to do because I had low self-esteem and no relationship history to date but, that didn’t make it healthy. I’d constantly ask myself, why did my mother decide to have me, a child, when she was still a child? This question became the fuel for a lot of anxiety and self-depreciation. It also became my sole reason for acquiring birth control.

I saw birth control as the key to being everything my mother wasn’t. It wasn’t that I was ashamed of her. I was ashamed of how everyone talked about people like her. In every health class I took from 5th grade on, teen pregnancy was a hot button issue. It was the center of school newspapers, and Lifetime Movie Network dramas and each time it was brought up it felt like a personal attack. There was no way to escape my constant internalization of the image of the bad black teen mother and I demonized it in my own head.

Birth control became my drug of choice and  every day at 4 p.m. I’d secretly fill with glee as I popped my little white round pill. And as I did this, I too internalized many of the harmful narratives about teen pregnancy. Though I–and many many others– lived as proof of all the good things that could result from an unplanned teen pregnancy, I still hated the very idea of having someone like me.

So, no the National Campaign to Prevent Teen and Unplanned Pregnancy is in no way a bad organization. However, the act of thanking birth control should not be reserved for those on an agenda to eliminate teen and unwanted pregnancy. It is crucial to the reproductive justice movement that teen and unplanned pregnancies stop being used as synonyms for unwanted and unfulfilling.

So #ThxBirthControl for keeping me company all those years I was scared to be like my mother, a woman I admire, because the narrative surrounding her story was one sided and demonized. Maybe one day we’ll be able to thank you without feeling so judgmental.