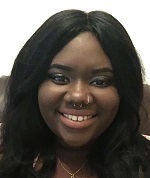 Major: Journalism w/ a certificate in Women, Gender, and Sexuality Studies
Hometown: Silver Spring, Maryland
Favorite writer: For the 20 years I've been alive I've had an issue with choosing favorites. I'd have to say my favorites of the moment are poets Warsan Shire and Rupi Kaur.
Favorite sex scene from a movie/TV/book: I've always had a deep love for the first sex scene in Love and Basketball between Omar Epps and Sanaa Lathan's character. Not only is it always exciting to see black love on the big screen but I do have a sore spot for the Maxwell playing in the background.
Hidden Talent: I've always been really good at making parody versions of songs. Very Weird Al-esque.

I Am Fat — And That’s More Than OK

I am fat. Of all the things that shape my identity, being fat probably falls within the top 5 most important. I’ve been fat for about as long as I can remember. My mother sometimes tells me forgotten old memories about the first few years of my life when I was thinner but those days are long gone. One of my most well-read pieces of published writing even centers in part, around me being a fat woman. So, once again — I am fat. Over the past few weeks I’ve found myself thinking more about my future life plans. One plan in particular had stuck out for me. Many people who know me know that I’d like to have four children. As an only child, I’ve always longed for a… Read more »

With President Trump under FBI investigation and the Affordable Care Act up for repeal there is really nothing to be happy about – at least that is what it feels like. Despite feelings of discouragement and helplessness there are plenty of things going on in this world that would put a smile on even the Grinch’s face. When the weight of the world gets to be more than any person can humanly handle, the only thing left to do is find ways to cheer yourself up. One of those ways is to look at the a few of the smaller more positive things happening. So – here are 2 pieces of important and positive news. Flint, Michigan On March 17th, the EPA awarded the state of Michigan $100 million to… Read more »

Stuck: Black Women And The Country That Hates Them

In December, I wrote a 12-page paper for a feminist theory class that analyzed the historically violent and parasitic relationship between black women (and those who identify as women or are perceived as women) and the United States. As I wrote the paper, I asked myself how all the black women before me were able to get through their lives knowing that they would continuously be disrespected and dehumanized by their own country. With each sentence I typed, I felt pain and stress thinking about how America has sucked the humanity from black women and still expects more. By the end I was physically and mentally exhausted. I am still exhausted. In the past week, I’ve read countless reports of black girls going missing in D.C. and their disappearances going… Read more »

(Pod)Cast Your Sorrows Away: 3 Podcasts from Black Women

2016 was the year of the meme. The year itself became a meme, with millions of people anxiously tweeting their excitement for the year ahead. Then 2017 rolled around – and it sucks. Though 2017 is barely 2 full months in, there have been many more defeats than triumphs and it seems the impending doom will continue. From increased ICE raids to Donald Trump’s repeal of laws protecting trans folk’s bathroom safety, there is no shortage of bad news. 2017’s endless list of badness presents a perfect opportunity to incorporate nuanced and diverse voices into your life. One of the many ways I do this is through podcasts. Not only are podcasts hilarious, informative, and interesting they also feel like hanging out with best friends you’ve never actually met. So,… Read more »

The date is February 10th, 2017 and subtle celebrity politics are. Officially. Dead. At least they are for me. There is no way in hell I will force myself to go through the slew of articles and “think pieces” about why Lady Gaga’s Super Bowl halftime show was “so political omg.” Or why a television show’s cast gave a moving speech at a ritzy awards show that is somehow suppose to touch even the most grizzly of us. It’s tired, trivial, and often overshadows the work of those who are actively putting their lives on the line to make concrete change. Don’t get me wrong, I love celebrities. Pop culture flows through my veins, pumping straight from my superficial heart just like plenty of young adults. I spend countless hours each… Read more »

In the 6 days following the historic inauguration of former reality television turned president, Donald Trump, 12 executive orders have been signed and there is no telling if the number will grow. The signing of these executive orders signify much of what can be expected of the new Trump administration. The administration would, for one, rather utilize federal tax dollars in order to fund a border wall between the U.S. and Mexico than support organizations that provide or even discuss abortion. And while the decision to reinstate the Global Gag rule and “build the wall” are not surprising after the last year of Trump’s campaign, they are important insights into who and what will be valued over the next 4 years. President Trumps decision to move forward with the building of… Read more »

In 8 days, the United States of America will call Donald Trump its president. With this monumental new transfer of power comes, for many people, lots of grief, anxiety, and perhaps even excitement. However, for those who have dedicated themselves to fighting for reproductive justice and freedom, the Trump administration brings with it possible feelings of defeat. President-elect Donald Trump has proven through his own words and action that, under his administration, abortion access and abortion providers will be under constant attack. And, while some may have argued that the soon-to-be president lacks the tact to accomplish a full-on attack of reproductive rights, Vice President Mike Pence’s track record proves that reproductive justice organizers have reasons to be afraid. Just months after the election, the Senate voted to repeal the… Read more »

It’s Finals Week. Yes, the anxiety-inducing week where professors throw out all care for student’s mental health and we cram a semester’s worth of material down our throats. However, because my life seems to be plagued by a particularly specific brand of evil, not all my classes held finals. Some of them held mini end-of-semester lectures meant to show students “the big picture.” Today’s final was one of those. My teacher spent the better half of an hour telling us we couldn’t write and lacked passion. The second half however, he answered questions from students on a variety of topics. It was during this section of class that he uttered this phrase: “The most important issue we as a country must tackle next is the issue of the Black Man.”… Read more »

November 16th was “Thanks, Birth Control” Day and as such, reproductive justice organizations flooded their timelines with tweet after tweet of birth control users everywhere pledging their undying love for what every knows and loves as — birth control. And, although the day was a ray of positivity after a week of what many saw as despair, I still feel strange about the entire thing. “Thanks, Birth Control” Day, known online as #ThxBirthControl, was started by the National Campaign to Prevent Teen and Unplanned Pregnancy. When this information came to my attention, I felt an instant irony. As the product of an unplanned teenage pregnancy, there are many reasons in my life to “thank birth control” and yet, here I stood the exact opposite of everything the day hoped to… Read more »