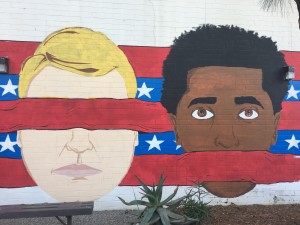 Free speech has been a heated and inconclusive source of debate in academia since the 1964 Free Speech Movement started at UC Berkeley. Since then, college campuses across the nation have been influential sites where the status and significance of the First Amendment has been negotiated. With the recognition that marginalized people are excised from political processes, public protest, organizing, and advocacy have been essential forms of resistance and community building, thus legitimizing the multiple global movements behind it. Adversely, free speech has historically been regarded by right-wing politicians such as Reagan and Nixon as a misuse of the Constitution to protect subversiveness — a symbol of judicial excess. This previous rejection of free speech has slowly begun to dissipate as neoconservatives have bastardized free speech and re-oriented it to silence marginalized people. There are at least five articles appearing in magazines and newspapers per week with neoconservatives bemoaning the purported loss of free speech on college campuses. These concerns, expectantly haven’t been raised in the interest of actually securing free speech for all students, but are purely retaliative. Similar to the “black on black crime” argument in the face of Black Lives Matter, the weaponizing of free speech by neoconservatives is a tactic of derailment.

The pattern of college students protesting conservative speakers and academics has been met with neoconservative backlash, imagining special snowflakes who are so intent on political correctness that they are unable to engage critically with contrasting perspectives. This exhausted debate surfaced on the Claremont Colleges on April 6th when known white supremacist, Blue Lives Matter advocate Heather MacDonald was set to deliver a talk titled “The War on Police” at Claremont McKenna’s Athenaeum. Student protesters blocked entryways with their bodies to prohibit access to the talk and shouted chants such as”Black Lives Matter” and “How do you spell fascism?” “CMC!” Both during the protest and after, student protesters were heckled by students, administrators, professors, and conservative media outlets about this supposed violation of free speech with little to no concern about the abuse that protesters endured by professors and students. The alternative tactic they were told they should have taken?: open dialogue and debate.

This call for open dialogue and compromise is old and illogical. First, it operates under the assumption that all sides of the debate have equal leveraging power; we know this isn’t true. Despite right-wing beliefs that Black Lives Matter has taken over and is a dominant belief, white supremacy is a fundamental fabric of the American nation-state. The idea that a movement that is barely five years old has unraveled it, is naive. It’s built into institutions, it’s codified into law; it’s maintenance is the purpose of school systems. So, when we are accosted with a sense of moral superiority for refusing to engage, it’s conveniently shifted into a critique of intellect when it’s largely a refusal to partake in a conversation that we are systematically set up to lose. A debate over the validity of Black Lives Matter is a discussion of two different histories, two separate ideas of knowledge and truth. When students attended and continue to attend institutions designed to stroke their egos and maintain their sense of superiority, a compromise that values both sides is simply impossible — one is already privileged. The call for discourse is contingent on the knowledge that white supremacy will always win regardless of how exceptional the argument against it is. The idea that through logical, persistent and reasonable discussion, something as illogical as white supremacy can be explained away is ludicrous. Suggesting that student protesters can resolve, through dialogue, something that’s based on social constructs, pseudo-science, and ethno-centricism is like fitting a square block into a circular frame. Not to mention, explanations, both academic, accessible, written, oral, musical, etc. have been given for decades. It’s not a matter of misinformation at this point. It’s comfortable ignorance.

Marcus Garvey met with the KKK in 1932 to form an alliance to achieve both of their ends of racial separatism. Debate and discussion have happened even in the most insidious circumstances. It’s not that college students today are unaware of the potentials of compromise or are ill-equipped to constructively engage with people whom we vehemently disagree with, but that we are rejecting the idea that our humanity is a subject worthy of legitimate debate.

This intellectualization of existence argues that if we want to be “good academics,” that we must divorce all emotion and feeling from our politics and focus on facts and logic. That to be “good” academics, we need to hear from our provocateurs to strengthen our standpoints. This idea is based on the belief that speakers are presenting alternative, new information that verges so far from dominant rhetoric that the insularity of collegiate utopias would allow us to miss it. College students ability to carve out niche environments to secure our survival in predominantly white institutions, in a white-controlled world is not indicative of some sort of echo chamber. The very fact that spaces have to be intentionally designed and constantly defended is a testament to the ubiquity and inescapability of white supremacy.

While intellectualizing existence is a championed strategy among students who have no tangible stakes in whether or not black life is valued, for others, this isn’t a theoretical discussion where everyone says their piece and then leaves. These “opinions” and “beliefs” that are clung to as shields against critiques of poorly informed and supported arguments are not neutral and cannot be treated as such. What makes an opinion is that it cannot be verified outside of the fact that a particular individual believes it. For example, I personally think stringed instruments sound better than brass ones. This differs from Heather MacDonald’s assertion that racist cops aren’t the major threat to black communities, but rather, black-on-black crime committed by gang bangers and criminals. For someone with an extensive education and access to Google, I hesitate to regard this as an uninformed opinion when its actually just a product of selective hearing, historical amnesia, and racism. MacDonald’s opinion is actually just wrong, and just because her opinion is individual doesn’t make it safe from interrogation and critique. Just because it’s her opinion certainly doesn’t mean that anyone is obligated to give air time. Just because it’s her opinion also doesn’t mean that it doesn’t have violent implications. Reality doesn’t care about the necessity of open dialogue and discourse. For black folks who are frequent recipients of police brutality or who live their lives under constant fear of state-sanctioned violence, they certainly don’t either.

Holding institutions accountable for financially and ideologically investing in white supremacy is not a violation of free speech. Demanding that institutions prioritize marginalized students over discourse is not a violation of free speech. Threatening students who participated in the protest with disciplinary action for exercising this right that neoconservatives claim to hold so dearly definitely is. This ideological inconsistency just proves that the rights embracement of free speech is exclusively for its ability to stifle the regulatory state. Only when free speech is used to condemn hate speech or harassment does the right suddenly choose to fawn over free (inflammatory) speech