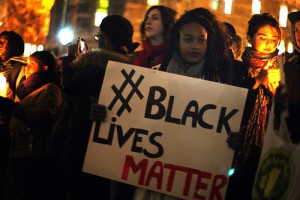 During this outpouring of demonstration and activism against the racist American system that does not indict killer cops, and media release of accounts of police brutality, let’s not forget that black girls and women are also murdered by the police. In the recent weeks we have seen many stories that highlight injustices of police brutality, and many of these have prominently featured the killing of black men. It is important to think about how the deaths of unarmed, innocent people at the hands of the police are not isolated incidents. Black men are uniquely impacted by this violence, but the brutality is also not just against men. Children, women, and queer folk of color are also facing death and abuse by the system.

Perhaps, it is simpler for the media to only tackle the issue of black men being killed by the police, but the truth is much more complex. Our nation is facing is systemic racism that is hurting everyone, some people more so than others. This is a reproductive justice issue, this is a gender equity issue. Children, women, and queer people of color are dying.

Queer People of Color are dying. This list compiled on the website for Transgender Day of Remembrance shows over 700 names of trans women (mostly people of color) have been murdered in the past years. This is an epidemic of murder and violence, especially when “the Department of Justice doesn’t currently track data on gender and sexual orientation, it can be frustrating to try and gather homicide statistics through law enforcement agencies.”

Children are dying. A seven year old Detroit girl was shot in her sleep by a cop and there was no indictment for the cops. The Daily Beast just released a list of 14 teens who were killed since Michael Brown’s murder in Ferguson.

This racism is a reproductive justice issue when parents cannot even protect their children. This report tells the story of a police attack on an unarmed innocent black man named Brian Dennison, age 29, who was trying to save his daughter who was suffering from a severe asthma attack. Dennison says, “…I was explaining to him the situation with my daughter and he took a shot at me. While my daughter was in my hands and at that moment in time right then and there, I thought I was shot or she was shot.” It is beyond infuriating and terrifying that parents cannot even have the ability to protect their children under the current racist police state.

Women are dying and are not immune to the police brutality that is taking place across the country. Just two weeks ago, 37-year-old Tanisha Anderson died after the police slammed her on the pavement outside of her home. The Huffington Post covered the ties between RJ and Ferguson and listed the names of “Yvette Smith in Bastrop, TX; Eleanor Bumpurs in the Bronx; seven-year-old Aiyana Stanley-Jones in Detroit; Tarika Wilson in Lima, OH”; all women who were killed by the police. This list tells the stories of women and girls who were unarmed and murdered. This article from the Nation discusses the role that women have played in working against the historical killing of black people in the United States, stating “Every generation has its own unfinished work to do. It is time for a twenty-first-century anti-lynching campaign.” If that campaign is going to become the dominant ideology, the media needs to actively work against racism.

All the while, the women who have had to face the deaths of their loved ones and husbands are being heinously trivialized by the media. Instead of posting racist stories about the women affected by these deaths as out of control or angry, journalists need to be actively working to support the stories of women whose husbands, children, or loved ones have been killed. ABC News’ representation of Esaw Garner, the wife of Eric Garner, as “lashing out” is an example of this racist media that really stood out to me. Her husband was strangled to death by the cops and cameras captured the entire occurrence. Yet even with videographic evidence of their murderous acts, no cop was indicted. Ms. Garner’s own words explain the situation better than I ever could:

“The time for remorse would’ve been when my husband was yelling to breathe. That would’ve been the time for him to show some type of remorse or some type of care for another human being’s life, when he was screaming eleven times that he can’t breathe. So there’s nothing that him, or his prayers, or anything else would make me feel any different. No I don’t accept his apology, no I could care less about his condolences, no I could care less. He’s still working, he’s still getting a paycheck, he’s still feeding his kids, and my husband is six feet under, and I’m looking for a way to feed my kids now. You know, who’s gonna play santa claus for my grandkids this year, cause he played santa claus for my grandkids, who’s gonna do that now?”

Black women and girls are also getting harassed by the police. There names need to be acknowledged and justice needs to be demanded. This justice cannot be created solely in the form of indictment of the officers that brutalized them, but we must seek to also think about the ways in which our system as a whole is supporting the death and abuse of people of color. How can we seek to indict not only one man that hurts another, but the system as a whole?

I say #blacklivesmatter because it acknowledges the truth of what is happening in America today. I urge people to consider sharing #blacklivesmatter, instead of #alllivesmatter. The later generalizes injustice, which can often unknowingly silence those who are impacted by it most. In a perfect world, we only have to acknowledge that all lives matter, but right now not all lives are being equally respected and that needs to be addressed. We need to work to prioritize the experiences and lives of people of color at this time.

May the innocent people who have been victimized by this violence rest in power. I encourage you to demonstrate against the brutal acts that have occurred, seek to educate others, and be an advocate for the lives of people who have been targeted by the violence. Showing solidarity means not just continuing to exist in agreement with these sentiments, but actively working against the systems that have supported the deaths of so many innocent people because #blacklivesmatter.