Reminder: Low Income Families Are People Not Caricatures of Poverty 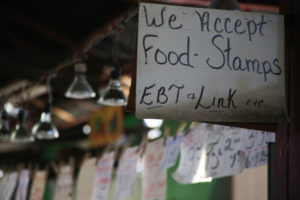 This week, the Trump Administration decided to modify the way the Supplemental Nutrition Assistance Program (SNAP) distributes aid. Under the new proposal, SNAP would be cut by 30%. To achieve this cut, SNAP recipients will no longer be able use the money to buy what they see fit for their family. Instead, families would receive their aid in the form of a “USDA Foods package.” The package would be delivered to a family’s door, with food that the government has deemed appropriate. The budget uses “ready to eat cereals, pasta, peanut butter, beans and canned fruit” as an example of what the box would look like. Basically, the Trump administration does not think poor people should have a choice as to what they want to eat, instead they should survive on a ration system that disregards the individual needs of those on SNAP.

While I was growing up, my family was on SNAP. To this day, my aunts depend on SNAP to feed their families. There is a lot of criticism on the new proposal, mostly from people like me, who know what its like to be on food stamps and what that means for a family. Our family used SNAP to buy food they knew they could extend for our entire family. We got money for four kids, but extended our food stamps to feed our grandparents in Mexico as well. My mom had to choose food that we, as kids, could make when she was working. Especially as a Mexican family, our diet and grocery habits were very particular to our culture and traditions. The government imposing a diet they deem appropriate for everyone on poor people is patronizing, restrictive, and dehumanizing. It seems that the legislation and debate around food stamps has always been because people expect poverty to look a very particular way. Instead of seeing poor families as human beings, they are expected to be caricatures. In the imposition of ration boxes, the idea seems to be: “if they were really poor they would be happy eating canned vegetables for dinner.” For those who do not see poor people as human beings, the idea of a family enjoying something other than survival food is preposterous because they do not see us as worthy of enjoying food.

There are many problems with the proposal. Even the delivery method is flawed. Many families do not have a stable residence, and in a lot of neighborhoods there is no guarantee the delivery will actually reach the family relying on it. Even if there is a designated pick-up area, it will only increase the stigma around food stamps. As it is, existing guidelines make it difficult for people to buy the food they need without being treated like their poverty is a consequence or a flaw. When I was younger, I remember the stigma around having to buy a specific brand of cheese in order for it to be covered by WIC or SNAP. At some point, we had to go to a special office to pick up the designated food options by WIC. It was difficult for my mom to go to the office to get our food because we did not have transportation. This is just one of the problems that arise when the actual people impacted aren’t considered. Like with many issues, the Trump administration is making decisions for people they are completely out of touch with.

Reproductive Justice demands that “all of us deserve to make our own decisions about our bodies, health, sexuality, and whether and when to have children with dignity and autonomy and to raise the family we have in a safe, healthy environment.” The government is taking away our agency to decide what is best to feed our families. There are still many improvements to be made regarding food stamps. Every change should be made with the idea that poor people are human beings in mind. Legislators need to consider the families they are affecting before making such important decisions.