Saddest Season: Rom-Coms and the Reframing of Toxic Relationships 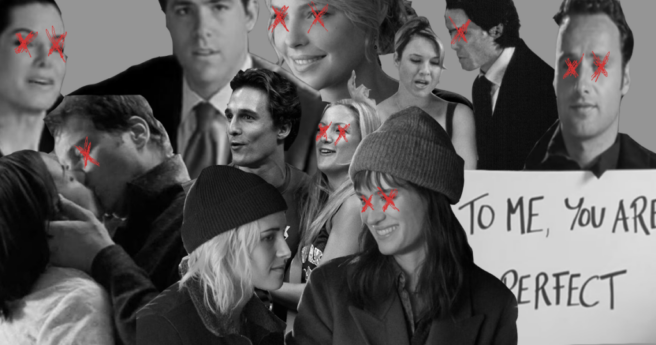 After the year we just experienced, I have been looking forward to Christmas for months. Looking for a boost in holiday-themed serotonin I sat down and watched the newest addition to the Christmas collection Happiest Season. The story, a semi-autobiography written by director Clea Duval, revolves around lesbian couple Harper and Abby going home to meet Harper’s parents as a way to cure Abby’s general distaste for the holiday. It’s later revealed that despite the invitation, Harper hasn’t come out to her conservative parents, and asks her girlfriend to pretend to be her straight roommate. After chaotic family moments and relationship tension, Harper finally comes out to her parents and the family embraces the couple on Christmas morning.

Rom-coms have always been a source of enjoyment for decades with almost everyone having a personal favorite they’ve probably watched countless times. The movies always follow a standard format: two vastly different people meet, fall in love, face a challenge that temporarily divides the lovers, and eventually reconcile to make a happy ending. Despite being criticized as formulaic and trite by film and cultural critics, romcoms consistently top box office and streaming charts. In a world full of bad dates and rough breakups, seeing a movie where love comes naturally is a comforting notion to many audience members.

The question I’m left asking, however, is whether the couple’s love should have prevailed when taking a critical look at their relationship. Happiest Season is written to be a story of the trials and tribulations of being queer in a conservative family, but for being the supposed protagonist, Harper is often selfish beyond what should be acceptable. While the difficulties of being in the closet shouldn’t be minimized, Harper not only outted her first girlfriend Riley in high school but brazenly denied her relationship with Abby when confronted in front of party guests. She allowed Abby to be treated poorly by her family, failing to object when her mother made her sleep in the basement and when she was uninvited to her father’s campaign events. Harper not only failed to intervene when others were abusing her partner but participated in it when she failed to mention she’d have to pretend to be straight until they were almost to her family home, essentially taking her consent away.

Just like silly antics and personality clashes are an integral part of the romantic comedy recipe, a darker element to that formula that’s rarely talked about is the romanticization of toxic and even abusive partner interactions.

Putting aside the stringent gender roles, heteronormativity, and unrealistic expectations, in almost every movie that falls into the Rom-Com box the conflict is almost always caused by one lover’s troublesome behavior. It’s nearly impossible to find a movie in this category that doesn’t fit that bill. According to Christopher Orr of the Atlantic, the genre’s questionable aspects are spliced into 3 different parts:

“it offers up at least three disturbing lessons about love. First, that love is overwhelmingly a product of physical attraction and requires virtually no verbal communication or intellectual/emotional affinity of any kind. Second, that the principal barrier to consummating a relationship is mustering the nerve to say “I love you”—preferably with some grand gesture—and that once you manage that, you’re basically on the fast track to nuptial bliss. And third, that any actual obstacle to romantic fulfillment, however surmountable, is not worth the effort it would require to overcome.”

As Orr states, showmanship and physical attributes are seen as preferential to emotional vulnerability and time dedication. Rather than showcasing the amount of work it takes to make a romantic partnership work, we see relationships as a prize; a conquest to be won. A prime example of these ideas is in Christmas’s “feel good” favorite Love Actually, where newlywed Juliet is essentially stalked by her husband’s best friend Mark who’s in love with her but treats her poorly in order to disguise his true feelings. After Juliet discovers Mark’s secret, his behavior is seemingly rewarded with a kiss when he shows up at her house with a boombox and cue cards. In the same movie, newly single Jamie falls in love with his Portuguese monolingual housekeeper Aurélia and later proposes. Instead of learning her language to see if they’re an emotional match, Jamie only learns enough Portuguese to stake his claim to a woman he’s met once and is only superficially attracted to.

In the world of romantic comedies, it’s also proven that women aren’t exempt from perpetuating dangerous relationship ideals. In one of the most popular films of its time, How to Lose a Guy in 10 Days, the heroine of the film uses her partner as a social experiment for work, seeing how far she can push him with her various strange behaviors until he dumps her. Although she later comes to actually love him, he learns about her investigation and shuns her. Even after finding out that she exploited him in order to write a column about him in a nationally published magazine, he eventually comes around and chases her in order to dissuade her from moving to a new city. In Happiest Season, we also see that not just heterosexual women but also queer couples aren’t immune to the genre-norm pattern of relationship red flags.

One of the most dangerous parts about romantic comedies is the marketing of these same destructive tropes to young adults with the sub-genre teen romcoms. A trope mostly unique to the teen-centric movies is the “glow up”. A slight tweak to its adult theme counterpart, a makeover scene is almost always a method of becoming “more attractive” in order to be accepted by a desired romantic partner. The flat-ironed hair and the replacement of glasses for contact lenses is often the key in these movies to acquiring love and acceptance by someone who otherwise wouldn’t have given a second look. These persistent themes are vicious to any viewer, but especially to young vulnerable minds that are only starting to develop ideas on love, sexuality, and self-esteem.

To consumers of all ages, society needs to work harder in emphasizing the fact that you shouldn’t have to tolerate uncomfortable behavior from a potential partner or embody western beauty standards to be worthy of love. Love isn’t built on stalking, manipulation, or gaslighting; Love is built on effort, communication, and most importantly, respect. Relationships are hard work, and despite what our media tells us, they take time to develop and blossom. Am I advocating for romantic comedies to be canceled? No. What I am advocating for, however, is the promotion and normalization by the popular culture of what healthy relationships are supposed to look like. We can eat our junk food on occasion, and we shouldn’t be ashamed to enjoy our guilty pleasures. What we need to remember, however, is that we also need to eat our vegetables too. That’s what keeps our expectations and our minds healthy.