#SorryNotSorry: Bush Doesn’t Get a Pass 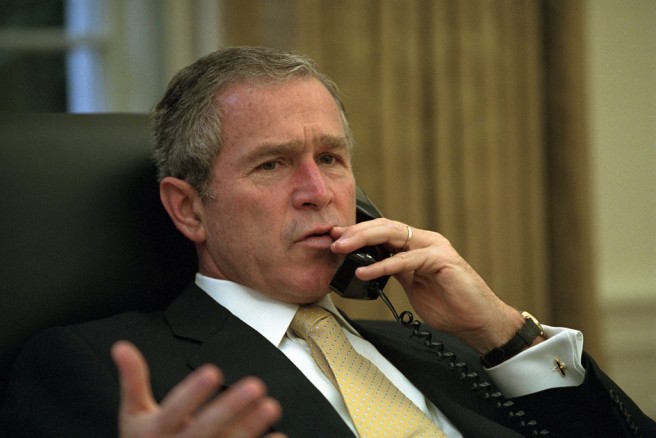 As outrage and protests surrounding abortion access, race relations and trans bathroom laws continue one month into Trump’s presidency, we are reminded how his administration resembles a dictatorship. Just days after rejecting ties to Russia, and claiming “all media is fake because so much of the media is fake,” Trump refused to allow CNN, the New York Times, and other news outlets to have access to press briefings. Not only does this limit the amount of opinions on the press briefings, it is harmful to our civil liberties and undermines the 1st Amendment. As the first conservative president we’ve had in eight years, it’s inevitable that people have already made uninformed comparisons of Trump to former president, George W. Bush. Memes that mocked Bush’s battle with a poncho at Trump’s inauguration and TV appearances where Bush has refused to support Trump’s agenda, have already made the rounds on the Internet. Although they are in no way similar, we STILL can’t give Bush a pass.

We all remember Hurricane Katrina. Natural disasters don’t discriminate, but Katrina exposed the social and economic inequalities that plague American citizens. Before Katrina struck, many news stations, in addition to local and state government officials, put out a bulletin that requested mandatory evacuation of the affected areas. This posed a problem because 28% of New Orleans parish residents, 80% of whom are African American, live below the poverty line. In addition, 100,000 residents do not have access to modes of personal transportation, such as a car. It was one of the most defining moments of the intersection of social and racial injustice that shook the country. Not only was Bush pictured in a photo surveying the damage Katrina wrought from an aircraft that showed his privilege, the Federal Emergency Management Agency (FEMA) continued to mislead the public, stating more than once that citizens of New Orleans were being supplied with materials and food, even though nothing was happening on the ground.

In addition, Bush’s Presidential Advisory Council on HIV and AIDS, better known as PACHA, faced a lot of scrutiny during his time as the nation’s leader.  Even though many critics say that Bush’s presidential platform included protections for the LGBTQ+ community, Bush and his council advocated for many anti-gay ideologies, such as abstinence only education. This lack of concern for the LGBTQ+ community resembles what has already started taking shape under the Trump presidency, as he withdraws protections for trans folks. Being able to use the bathroom of choice helps trans students across the nation feel safe and protected. While many politicians claim these unjust laws are to protect women and children, statistics prove time and time again that cisgender men are still the biggest predators of sexual violence.

Bush may not have been a dictator, but his policies were far from decent–from setting poor public education standards to embroiling the nation in two costly and highly ineffective wars. Overlooking Bush’s past and ignoring his past mistakes as our nation’s leader will not help us in the Trump era, and won’t relieve the tensions that these two presidents have created. In no way are they similar, but we should remember that neither one defends civil liberties, freedom of choice, or economic and social justice for all.