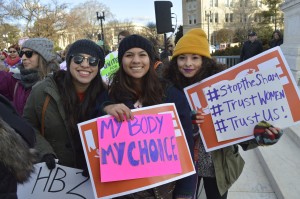 Since Texas’s anti-abortion bill, HB2 made it to the Supreme Court, many other states have followed suit with similar anti-choice legislation.

Louisiana has recently tried enforcing legislation from a 2014 clinic regulation law that would close all but 1 of the abortion-providing clinics in the state. However, the Supreme Court blocked the law until the courts reach a decision about HB2. Although some clinics have already had to cease operation due to this law.

On March 2nd, Oklahoma joined in on the frenzy and passed a bill that would require anti-abortion curriculum to be taught at all of the state’s public high schools. This goes beyond abstinence-only education, and goes as far as asserting the “evils” of abortion. It’s important to note that Oklahoma doesn’t have any sort of required sexual education program, so this curriculum could easily be the only thing that students are taught about sex.

The Florida legislature also passed a restrictive abortion bill (HB1411) on March 9th. The bill is similar to the Texas abortion bill because it requires doctors who provide abortions to also have admitting privileges at nearby hospitals.Under this legislation, clinics that perform other services (such as STI testing, cancer screenings, and other healthcare services) could lose ALL of their state funding if they also perform abortions.

Meanwhile, an anti-choice bill, HB1337, was just approved by the Indiana legislature last week. The law is SO absurd that it requires the person who has the abortion to not only pay for the procedure, but to also pay for the cremation or burial of the fetus. As Bob Cesca says in his Salon article,

It goes without saying that the law adds an additional financial disincentive to having an abortion, in this case additional expenses that could easily make it monetarily prohibitive to terminate a pregnancy. There’s also the macabre notion of paying for a mini-funeral for what amounts to, in most cases, a microscopic clump of undifferentiated cells.

And that’s not all. The Indiana law requires women to see an ultrasound and hear the heartbeat of the fetus, and must have this done 18 hours prior to the abortion. This means that women who have to travel a far distance for their abortions, will most likely have to stay somewhere near the clinic, adding an extra cost and burden to the procedure. The law then proposes that women who knowingly abort a deformed or disabled fetus may then be criminally punished.

In his Salon piece, Cesca comes to an interesting point.

This raises an interesting thought: Given that sperm constitutes half the genetic material of human life, should legislators also require half-funerals every time men in Indiana have orgasms? Of course that’ll never happen because laws like HB 1337 are as much about oppressing women as they are about rescuing every zygote.

These laws aren’t about protecting women; they’re about controlling women. These laws aren’t attempts to “make abortion safer” or to “protect the lives of the unborn.” If these laws were about “the children” then children in foster care and adoption agencies would be treated a hell-of-a-lot better. Shit, if these mandates were about “the children,” then our public education system wouldn’t be nearly as screwed up as it is now. These restrictions are about holding women, young people, people of color, and people in poverty, down. These laws are created to try to keep us in our place. These bills MUST be stopped. We have to act. Bodily autonomy needs to be a basic human right.