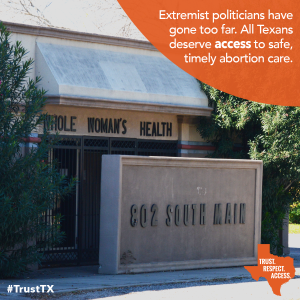 Young Texas students learned how to call upon their government representatives when they took to the state Capitol to lobby for a package of reproductive healthcare bills.

Activists from all over Texas gathered at the Capitol February 26 to speak out against a set of proposed bills that would severely limit a person’s access to sex education, abortion and other healthcare needs.

Armed with a new campaign aimed at putting trust, respect, and access back into the hands of Texans, students met individually with state senators and representatives to inform them of the policies regarding reproductive rights.

The tiered campaign has three elements, the first one being trust; trusting Texans to make their own reproductive healthcare decisions, including the time and spacing of their children. Under the trust tier also falls the installation of comprehensive, age-appropriate and medically accurate sex education.

The second tier of the campaign is respect; respecting health care professionals’ medical and ethical judgment about the care each patient needs. This set of legislation would eliminate mandatory ultrasounds, biased counseling, and mandatory delays that are medically unnecessary to receive an abortion.

The final tier is access which simply guarantees all Texans access to a safe and timely abortion should they be seeking one.

Students were separated into small teams and each given a representative to speak with. In most cases however, lobbyists don’t speak directly with reps and instead speak with a staff member.

That was the case with Emma Brockway, Texas State University student, whose lobby session lasted about twenty minutes, which is longer than most.

“I began talking about the bill concerning 24 hour waiting periods and [the aide] seemed unresponsive to that, stating that his candidate was pro-life,” Brockway said. “Then my team member introduced the bill regarding sex education and he seemed to respond better to that. Overall I think the meeting went well.”

The majority of students who lobbied said that this was their first experience doing so but they walked away from it feeling positively.

“Although, even knowing that there are very few Texas representatives championing our causes, it further motivated me to continue being an activist and to advocate for these necessary policies,” Morris said. “This conference really helped me find my voice and demand the rights Texas deserves.”

Natalia Rocafuerte, Texas State student agreed, saying that the experience made her more confident in her activism.

“I met a lot of great people and feel really motivated to be more proactive with my community,” she said.

After the lobbying session students and representatives from the Texas Freedom Network, Whole Women’s Health and the National Latina Institute for Reproductive Health gathered on the Capitol’s east steps for a rally.

“This is your Capitol and your representatives work for you,” said Rep Turner.

Adriano Perez, University of Texas at El Paso student, had an important role as he represented all the young students who lobbied earlier in the day. His speech invigorated the crowd that stood in the afternoon’s cold weather.

To conclude the rally Texas Freedom Network president, Kathy Miller, encouraged the audience to do three things. One being to sign the Trust Respect and Access pledge online, two was to speak with five people about the proposed legislation, and three was to then follow up with the representatives in their own town.

If you’re in Texas and are interested in making a difference please sign the pledge at http://trustrespectaccess.org/.