Supreme Court Nomination – What’s Going On and What You Can Do! 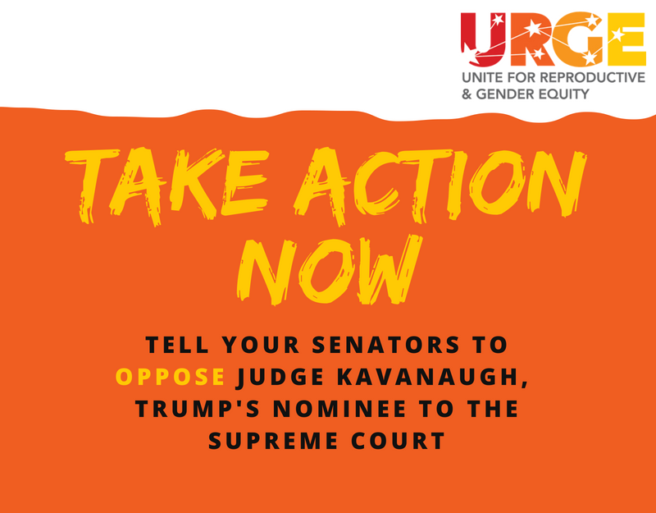 Who is Brett Kavanaugh?

He’s Trump’s nominee to the Supreme Court of the United States (SCOTUS). Currently, he’s a judge on the DC Circuit Court of Appeals. He’s a cis white Catholic man who went to Yale and is a member of the Federalist Society (a conservative group for lawyers). And, ideologically, he is more conservative than all members of the current Court, except Justice Clarence Thomas.

Remember Jane Doe, the unaccompanied immigrant minor in government custody who sought abortion care? The Trump Administration tried to stop her from having an abortion and, after hearing the case, Judge Kavanaugh sided with Trump.

Judge Kavanaugh also believes that the religious or moral beliefs of your employer or university should get to dictate whether or not you can access birth control. His broad view of “religious liberty” is nothing more than granting a governmental license to discriminate against LGBTQ folks.

So, yeah, it’s not good for abortion rights, LGBTQ rights, workers’ rights….really anyone’s rights if you aren’t a cis white dude. But we can fight back to stop his confirmation! We’ll get to that, first, let’s review the context.

How did we get here?

On June 27, 2018, Justice Anthony Kennedy announced his retirement from SCOTUS. This leaves a vacancy on the nine member court – and an even split of four conservative and four liberal justices among the remaining eight members. As a moderate on some issues, Justice Kennedy has served as a swing vote for years, confirming LGBTQ rights, the right to abortion without the burden of state interference, but also ruling against the Affordable Care Act and workers rights. His departure leaves an opening to shift the Court to a solid conservative majority with no moderate swing vote.

Why does it matter?

First, let’s do some quick civics to make sure we’re all on the same page. As the third branch of government, the judiciary plays a significant role in our lives. While Congress makes the laws and the Executive implements them, the judiciary interprets the laws to ensure they are fair and not infringing on the Constitutional rights of citizens.

Our judiciary is set up as a tiered system with district courts at the first level, hearing the largest volume of cases. The ability to appeal a case is critical to ensuring our rights are not trampled by the courts. The Courts of Appeals provide constitutional review and must follow the precedent set by Supreme Court decisions. If there is disagreement between Courts of Appeals on how to interpret the law, the Supreme Court may choose to take up the case. Any decision by the Supreme Court creates Constitutionally binding precedent with the force of law – just like any legislation passed by Congress.

And every year, the Court weighs in on crucial topics like how our voting districts are drawn (which affects the power of your vote), whether workers’ can unionize, just how strictly states can regulate abortion, whether states can legally discriminate against LGBTQ folks, and more. Not to mention, they are the only ones allowed to change previous Court precedent (like, say, Roe v. Wade for example). The Court MATTERS and their decisions have a direct affect on your day-to-day life.

And, remember when we said that SCOTUS’ job is to be sure that laws don’t infringe on y’alls constitutional rights just a minute ago? Yeah. Turns out figuring out what exactly is a constitutional infringement is really subjective! Supreme Court justices are human beings, just like the rest of us, and they each bring their own perspectives and biases to judicial decision making. That’s why who is on the Supreme Court, and who is interpreting laws that affect all of us, matters so much.

Okay, so what happens next?

Judge Kavanaugh has been nominated, but to actually get the job, he must be confirmed by the Senate (the House has no role in the nominations process). The vote margin in the Senate is SO CLOSE.

Basically, this is a winnable fight (remember the ACA? Same margin and we WON because y’all showed up and made your voices heard). So it is IMPERATIVE that everyone contact their Senators, no matter their ideology, to tell them to oppose Kavanaugh.

Ready to add your voice? We got you covered and even drafted a template email you can send in just a couple clicks! Take action now to tell your Senators to vote no on Judge Kavanaugh’s nomination!