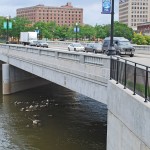 On Sunday, September 21, 2014, the People’s Climate March was held in New York City. Organizers estimated that over 400,000 people from across the globe gathered to protest climate destabilization. The rally was devised in response to the United Nation’s Climate Summit as a strategy for international environmental justice advocates. Many people in attendance of the march voiced their encouragement of governments to put sanctions on domestic industries and corporations that will decrease pollution, and called for divestment from corporations that thrive off of the exploitation of people and the environment. The People’s Climate March was the largest climate march in history, and with “2808 solidarity events in 166 countries,” it is clear that the degradation of the environmental is tied to many social justice issues. As advocates for reproductive… Read more »

India just banned the use/exploitation of dolphins as entertainment, as they are now considered “non-human persons”. Blackfish, a documentary about the psychological realities other animals face when confined in captivity, has just opened in theaters (at the distress of SeaWorld). Bird brain mapping has recently revealed that birds are “remarkably intelligent in a similar way to mammals such as humans and monkeys,” but ‘bird brain’ is still an insult. And the U.S. State Department and President Obama have decided to push ahead with building the Keystone XL Pipeline’s southern half amongst numerous questionable building practices, even though the previous Keystone I Pipeline has leaked fourteen different times. But isn’t this the Choice USA blog? What does this have to do with reproductive justice? Everything. Having grown up with cats my whole… Read more »

Last Friday, I had the opportunity of attending the One Voice Summit hosted by Advocates for Youth, SIECUS , and the Sierra Club. The panels and the multitude of discussions tied reproductive and environmental justice together in very intricate ways. One of the topics that I believe was especially interesting and relevant was about toxins in the environment panel. It tied products young people use every day and the harmful toxins that may be in them. What made me initially want to write about this is because toxic substances are in everything around us from our chap sticks, to our lotions, our perfumes, and even the receipts we get any time we shop. Seeing the connection with this made me really uncomfortable because I felt overwhelming dread that I really couldn’t escape… Read more »