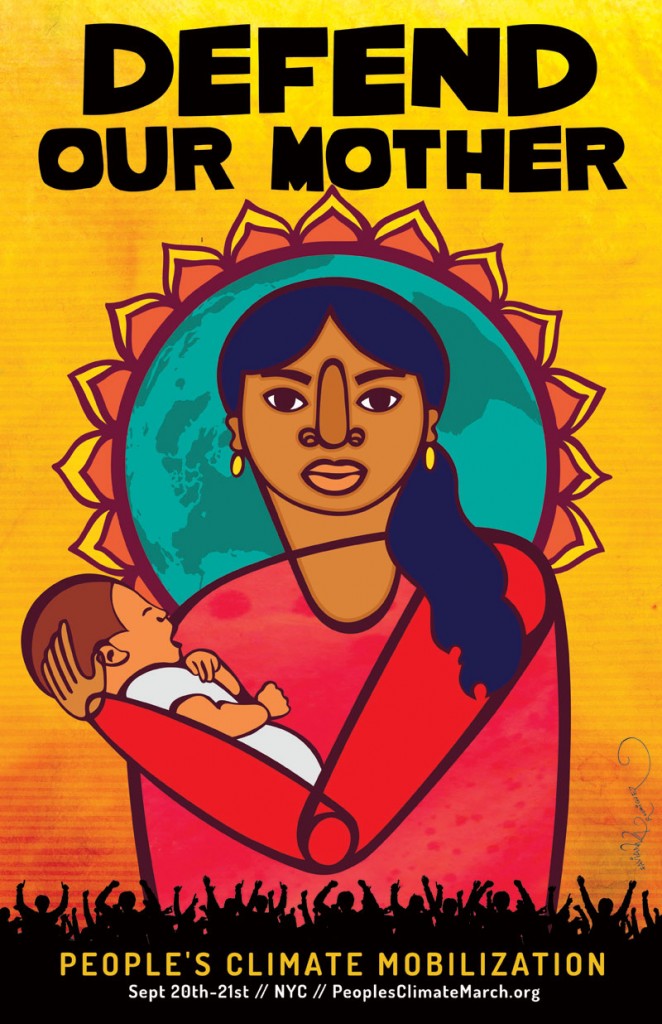 On Sunday, September 21, 2014, the People’s Climate March was held in New York City. Organizers estimated that over 400,000 people from across the globe gathered to protest climate destabilization. The rally was devised in response to the United Nation’s Climate Summit as a strategy for international environmental justice advocates. Many people in attendance of the march voiced their encouragement of governments to put sanctions on domestic industries and corporations that will decrease pollution, and called for divestment from corporations that thrive off of the exploitation of people and the environment. The People’s Climate March was the largest climate march in history, and with “2808 solidarity events in 166 countries,” it is clear that the degradation of the environmental is tied to many social justice issues.

As advocates for reproductive justice, we see how the environment can impact our health. The Environmental Protection Agency defines environmental justice as “the fair treatment and meaningful involvement of all people regardless of race, color, national origin, or income with respect to the development, implementation, and enforcement of environmental laws, regulations, and policies.”  The same equality standards are set within the reproductive justice framework: all people should have their health and safety protected.  Environmental and reproductive health are both social justice issues. People should have the power to make decisions about their own bodies, which encompasses everything from keeping toxins out of our waterways that impact fertility and pregnancy to having the ability to raise children without polluted air threatening to choke them out of  schools.

As seen in the People’s Climate March, these two causes can work together to build a coalition that is able to see the intersections between social justice issues. Through collaboration, each movement is able to reach more people and move closer towards realizing shared goals. Planned Parenthood, Women for Climate Justice, Women’s Environmental and Development Organization, The Women’s Earth and Climate Action Network, and many groups fighting for justice for women in the global south (where climate change is most hard hitting) all teamed up to march for climate change. All of these justice groups recognize environmental destabilization as having a direct impact on not just reproductive health, but also gender justice! Inclusive organizing is essential, especially when considering the intersectionality of social justice issues.

Here are some great resources and readings to find out more about the intersections between feminism, reproductive rights, and climate justice: