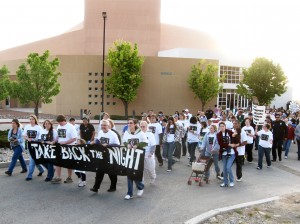 This week I attended my first Take Back the Night event at my university.

For those who aren’t familiar Take Back the Night is a national organization that serves to create safe communities and respectful relationships. They seek to end sexual assault, domestic and dating violence, sexual abuse.

The way my university organized was with a march through campus that culminated with a spoken word open mic at our outside amphitheater.

I got a couple of my friends together and we met up with the other organizations that were sponsoring it and decided to march. It was a little nerve-wracking just because it was the first time that I openly marched for anything on campus. I’m an anxious person so I usually choose to show my activism in different ways, but this was an important cause to me, so I went for it.

The march itself got a lot of attention but I think what was even more impactful was the spoken word session afterwards. It was hosted by Ebony Stewart, a Texas State alum and the only adult female three-time slam poet champion from Austin, Texas.

Stewart who previously worked as a sexual health educator for 4th and 5th grade students performed a poem that focused on the questions young men would ask her about sex. Although she is now a full-time artist she said that that poem is still one of her favorites to perform.

You can watch the video of one of the poems she performed for us here:

Stewart had such an infectious energy about her that really brought the audience together. After her performance the stage was open for anyone who wanted to participate. Multiple students shared their stories and it was extremely moving. I was proud of my university for allowing us to create a space of healing and dialogue around the topic of sexual assault and violence.

Choosing to do so through the means of poetry too was also very important. Using writing as not only a creative outlet but a way to heal is amazing. Often times we forget that when talking about reproductive issues, especially like sexual violence, the experiences can be deeply personal. Allowing a space for people to share their emotions through their own writing, is not only cathartic but empowering.

In a world where studies show that as many as 1 in 3 women and 1 in 6 men experience some form of sexual violence and less then 50% of victims report their crimes, it is important for us to take opportunities to end the silence whenever we can.

Whether it’s through spoken word sessions, protest marches, or even conversations with your friends speaking up about sexual assault is necessary to end the violence.