The Department of Justice defines sexual assault as, “any type of sexual contact or behavior that occurs without the explicit consent of the recipient.” What that definition fails to encompass is what comes with sexual assault and the complexities of survivor stories. No, sexual assault is not a new topic and though it has been receiving much more attention due to sexual assult accusations coming up in the presidential election, it is still a highly stigmatized and taboo topic of discussion. I was reminded of this after hanging out with a friend and having her reveal that her assaulter attended a party in her own home. When she told me who he was and what happened I found myself feeling cold and confused. Anger washed over me and I felt… Read more »

5 Responses to Rape that Feed, not Fight, Rape Culture

*Trigger warning: This article contains discussion of sexual assault. In 2016, we’ve seen unprecedented progress when it comes to recognizing the prevalence of rape culture, and coming up with legal and social ways to fight it. From bipartisan support for the Sexual Assault Survivor’s Bill of Rights and the success of the #ItsOnUs campaign, we’re closer than ever to protecting survivors of sexual violence and making sure victims feel safe and heard at every level. However, we’ve also seen some pretty shitty attempts to explain away rape culture, make excuses for convicted rapists, and blow off incendiary comments made by a certain Presidential candidate… There have been (too many) opportunities for our nation’s elected to not only speak out against rape and sexual violence, but to also take a stand against the pervasiveness of… Read more » 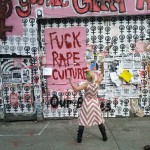 It’s college football season! From now until the Super Bowl, millions of Americans will dedicate their Saturays to college football and their Sundays to the NFL. They will prepare feasts composed of pizza, wings, burgers, and beer. They will watch the game at local sports bars, homes, and stadiums. They will be adorned in sports memorabilia. And many of them will fiercely defend their teams from negativity even at the expense of survivors of sexual assault who have been assaulted by a player on the team. On September 13, 2016, Allen Artis, a football player at University of North Carolina at Chapel Hill was suspended from the team and a warrant was issued for his arrest, but the arrest warrant was only issued when the survivor went public even though the attack… Read more »

It’s Long Past Time to Stop Favoring Athletics Over Justice

[Trigger warning: rape, sexual assault] Bodda getta, bodda getta, bodda getta, bah! Rah, rah, rah! Sis-boom-bah! Weagle, weagle, war damn eagle! Kick ‘em in the butt, big blue! If you don’t understand what any of that meant, don’t worry. It’s an Auburn University thing. I go to a school that loves football and tradition just as much as—okay, probably a little more than—the education of its students. This doesn’t bother me, because I love sports and I love the traditions that go with them (throwing my hat onto the ice at a hockey game is on my bucket list). What does bother me is when college athletics are valued over the safety of other students. It seems that every few months, another university is coming under fire for sweeping sexual… Read more »

Trigger Warning: Rape Today the New York Supreme Court will release the decision on the case filed by Kesha Sebert against her producer, Dr. Luke, who has filed his own lawsuit, with Sony’s support, claiming that the artist is just trying to defame him. The decision will ultimately determine whether or not Kesha will be able to publish any more music. Currently, she does not want to work with her assailant and is, under contract, not allowed to produce with another label or on her own. According to Kesha’s lawyer, she is suing Dr. Luke on assault and battery, sexual harassment, gender violence, civil harassment, unfair business, and intentional and negligent infliction of emotional distress. Kesha says that these charges date back to 2005 when she was approached and convinced… Read more »