The Department of Justice defines sexual assault as, “any type of sexual contact or behavior that occurs without the explicit consent of the recipient.”

What that definition fails to encompass is what comes with sexual assault and the complexities of survivor stories. No, sexual assault is not a new topic and though it has been receiving much more attention due to sexual assult accusations coming up in the presidential election, it is still a highly stigmatized and taboo topic of discussion.

I was reminded of this after hanging out with a friend and having her reveal that her assaulter attended a party in her own home. When she told me who he was and what happened I found myself feeling cold and confused. Anger washed over me and I felt myself cringing at many of the memories I had of him that night including a moment where I laughed and engaged with him. This was a person who had harmed a person I was close to. This was a person who harmed someone in general. And there he sat, two days prior, in my face playing super smash brothers.

However, as angry as I was I found myself upset that I didn’t notice my friend’s intense feelings of anxiety when she was forced to be feet away from her assaulter in her living room. She explained to me that this difficult situation came to be because her best friend and roommate was close friends with her assaulter and he didn’t view her assault as sexual assault. 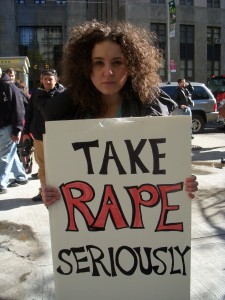 There it was in the flesh. The exact reason so many survivors find themselves afraid to talk about their experiences with those closest to them. When someone you love continues to assert their believe that your assault was not as “serious” as you think or explains that it was “just alcohol” there is nothing to feel but alienated. I urged my friend to speak to this particular friend and explain to him that his failure to acknowledge what happened to her as an act of violence and a crime hurt her.

After this interaction I found realizing that school faculty and supervisors are required to be trained, at many universities, on how to deal with the reporting of sexual assault and rape and yet loved ones are often those who handle these situations without tact and without care. One cannot call themselves a friend if they side with their loved-ones abuser. They are engaging in violent behavior that continues to dehumanize survivors.

According to RAINN female college-aged students (18-24) are at an elvated risk of sexual assualt. Of these people who are assualted only about 20% report to law enforcement. These numbers are not new but they are still harmful. With the stigma surrounding sexual assault and rape and reporting it, it is only more harmful to alienate your survivor friends. In order to change the conversation steps must be taken by non-survivors. For too long survivors have been silenced and continue to be silenced and those one story may be traumatic and horrifying it is sadly not the only story.