At 3am Tuesday morning, self-proclaimed “Pro-Lifers” in Texas passed a bill that would send women obtaining an abortion to face the death penalty. Texas lawmakers in the House Judiciary Committee sent the bill, which would criminalize abortion and classify it as homicide, to the Texas House for debate. At the hearing a pastor from Houston spoke and claimed that, “Whoever authorizes or commits murder is guilty.” State Rep. Tony Tinderholt, a Republican from Arlington, and an advocate for women, trans men, and non-binary folk receiving the death penalty, claimed that he isn’t “specifically targeting women…but equalizing the law,” which is laughable.

By entertaining these religious extremists’ views as potential laws even though they will kill people, our lawmakers are making it clear that they have a complete and utter disregard for the separation of church and state. They do not care about Supreme Court precedence, science, healthcare, and our literal constitutional rights to our own bodily autonomy. By legally criminalizing abortion, they are displaying their unabashed contempt for women and all those who seek to obtain an abortion. This attempt to control people and scare them of abortions through this state perpetuated propaganda is disgusting. If this state were to adopt this bill, we would also be adopting the extremist Christian ideology which people created this country to escape from in the first place. As an URGE City Activist Network member that’s attended multiple “Abortion Positive Tour” stops, I’ve realized that most young people in Texas don’t even know that abortion is legal in Texas because of nonsensical, potential laws/propaganda like this.

Maryland lawmakers debating the constitutionality of the death penalty

Aside from the hypocritical fallacies of the religious rights’ views, the death penalty itself is debated as cruel and unusual. It is only legal in 30 states and there have been just three cases in the U.S. this year. Two out of those three were in Texas.  However, we aren’t exactly executing people as fast as these pro-lifers want women and other people with uteruses dead. It doesn’t even make fiscal sense to imprison more people and then sentence them to the death penalty. Each execution costs Texas taxpayers ~$2,3 million. That is roughly the cost of imprisoning someone in 1 cell at the highest security for 40 years and doesn’t even include the length of time one is waiting for their sentence. 1 in 3 women will obtain an abortion in their lifetime. It would be ridiculous to expect the world to keep moving without two-thirds of women out there doing their thing.

The fact that we do not have healthcare for all in the richest country in the world is unbelievable enough. It’s sad that the “dystopian” future in which people are killed for receiving a necessary health care procedure seems to be fast approaching. Texas is the state with the highest maternal death rate in the country. The United States is third in all of the world. Why does the so-called “pro-life” movement want women dead? For every 1 death out of the 700 pregnancy-related deaths that occur in the United States, 70 women almost die. Some of these deaths could be prevented with an abortion. It is disappointing to know that these lawmakers don’t care about pregnant people and they prefer to force someone to carry out a life-threatening pregnancy or face death for opting to have with an important healthcare procedure.

Lawmakers across red states like Ohio, Georgia, and Alabama have each  recently passed multiple dangerous anti-abortion bills/laws. Those states are trying to pass a 6-week bans on abortion. 6 weeks into a pregnancy, one would only be two weeks on their period. People usually find out they are pregnant at 6-8 weeks. This is not adequate enough time to even know you’re pregnant and with all the hoops lawmakers have created, obtaining an abortion in these states will surely force pregnant folk to search for other unsafe alternatives. Why are all the red states pushing extremist, anti-abortion laws now? Well, if any of these laws are taken to the Supreme Court, newly elected accused rapist and Justice Brett Kavanaugh will happily pass these anti-choice laws to upkeep the religious right’s agenda and effectively overturn Roe. v. Wade. This is precisely the reason pro-choice folk dissented his appointment so much.

The anti-choice agenda doesn’t end at the Supreme Court however. Apparently, the White House will screen a film that is inaccurate propaganda this Friday. It is obvious that it is part of the Trump administration’s agenda to place a complete ban on abortion soon. I am sure birth control and Roe v. Wade will be attacked as well. Perhaps if Roe v. Wade is overturned and *rich white women* finally cannot obtain an abortion anymore, they will be forced to put in the effort to help us fight for access. 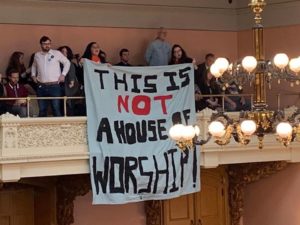