The 10 Best Things About the Women’s March on Washington

Like most college women, I voted in my first presidential election this cycle. When I completed my ballot, filling the empty circle next to “Hillary Rodham Clinton” with a wish, I thought, “I couldn’t be more blessed — my first presidential vote could help elect the first female president of the United States.” My four female housemates shared my feeling of privilege.
Fast forward to Jan. 21, 2017. Day 1 of Trump’s America. Alongside hundreds of thousands of women, my housemates and I marched on Washington to demonstrate our refusal to “go gentle into that [not-so] good night.”
1. The energy

When my friend Elena suggested we bring cough drops to the march, I thought she was being a little extra. But surrounded by hundreds of thousands of impassioned, inspired women who shared our commitment to social justice, we were hoarse from chanting and cheering within a few hours. In total awe, I took a brief video of the electricity that filled the metro station closest to the rally. Even early on a grey DC morning, everyone was ready to show Trump’s America the meaning of democracy:

We couldn’t look in any direction without being moved to laughter or tears (or both). Here are some of my all-time favorites: 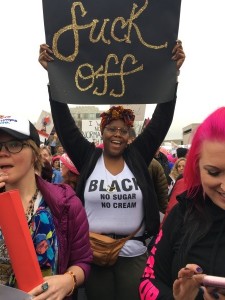 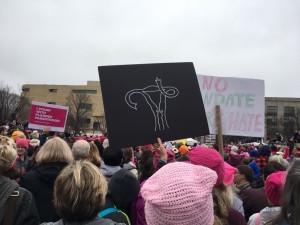 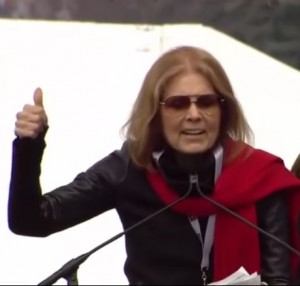 The massive crowd quieted to a hush as legendary feminist icon Gloria Steinem took the stage. “A Twitter finger must not become a trigger finger,” Steinem warned, alluding to Trump’s propensity to lash out on the social media platform. The spell over the crowd was temporarily broken by muffled laughter as we collectively wondered, “Did she?”

4. Kamala Harris’ reminder that everything is a “women’s issue” 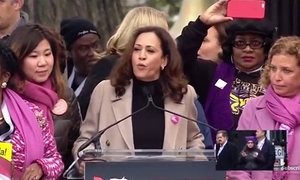 Sen. Kamala Harris (D-CA), the first Indian woman and second Black woman to serve in the position, is an absolute boss. Sen. Harris reminded the crowd that EVERY issue is a women’s issue, despite the frequent confinement of the women’s movement to so-called “women’s issues” like abortion and contraception. “We are tired of being relegated to simply being thought of as a particular constituency or demographic. We are a force!” 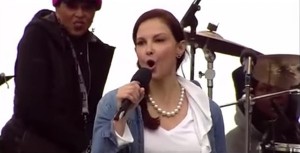 Ashley Judd burst onto the stage toward the end of Michael Moore’s speech to deliver a fiery reading of 19-year-old Nina Donovan’s poem, “Nasty Woman.” A self-proclaimed “Nasty Woman,” Judd declared herself “not as nasty” as the sexism and racism inflamed by Trump’s candidacy. My favorite line? “I am not as nasty as your own daughter being your favorite sex symbol.” Judd’s performance had the crowd chanting “hell yeah!” long after the final stanza.

6. The speech my awesome boss, Kierra, delivered on youth advocacy 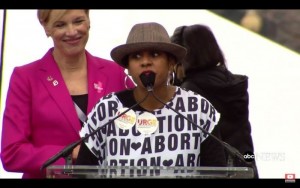 On my first day at URGE: Unite for Reproductive & Gender Equity, I met Executive Director Kierra Johnson and instantly knew she was a force with which to be reckoned. Kierra’s speech on youth advocacy only confirmed that first impression. Kierra celebrated young people’s advocacy for racial justice and gender equity, “Thank you for demanding to be seen, demanding to be heard, and demanding control of your destiny.” She reminded the crowd of the people’s power to shape the future of the nation, “Donald Trump is our president. But, the good news is he’s working for us now.” 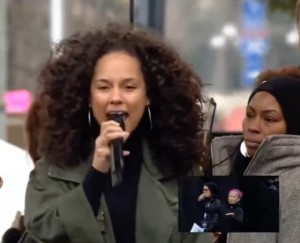 Alicia Keys’ performance of Maya Angelou’s “Still I Rise” took me back to the morning after the election. My campus was eerily quiet, with many choosing to stay home to process the events of the evening. My friend Jordan reminded me that morning, “Still, we rise.” It was as much a consolation as a call to action. 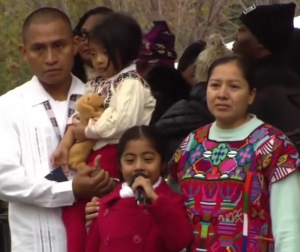 Sophie Cruz, the 6-year-old girl who presented a letter on the broken immigration system to Pope Francis, spoke alongside her family.
Sophie delivered her message of love in front of the massive crowd, “We are here together, making a chain of love to protect our families.”
Sophie’s speech was presented in both English and Spanish and culminated in a resounding cheer of “Sí, se puede!”

9. Janelle Monáe’s call-and-response with the Mothers of the Movement 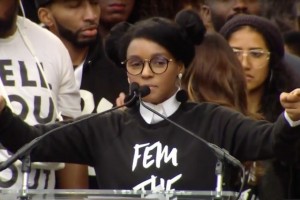 Janelle Monáe’s performance of the protest song “Hell You Talmbout” centered on a powerful call-and-response with the Mothers of the Movement. The Mothers called out the names of their murdered children, to which the crowd responded, “Say his name!” Monáe concluded the call-and-response with an emphasis on solidarity, “We must continue to protect each other. We must continue to choose freedom over fear.”

10. The promise of engaged, thoughtful resistance throughout the next four years

By the hundreds of thousands, we marched on Washington. When history demanded a moral stance be taken, we planted our unflinching flag.
It’s impossible to predict just what exactly was ignited on Saturday. But certainly, the road stretches long ahead of us. Our engaged, thoughtful resistance will be more critical than ever.
As Sen. Harris said, “Let’s get to work!”

Written by Gabi Hasson, a Senior at Georgetown University