Facts and propaganda are not synonymous with each other. I have felt the need to say that for quite some time given the constant anti-choice rhetoric that neglects to recognize the variety of abortion experiences. The pro-life stance is a position deeply rooted in religion, which highlights life rather than quality of life. Unlike the pro-choice stance which acknowledges a woman’s autonomy, the pro-life uses partial elements of religion and propaganda to erase the experiences that women who consider abortion take, with some of them being taken to drastic levels such as the picture below. 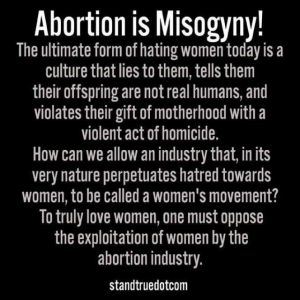 Most of the rhetoric that the pro-life movement employs is used to punish women. This concept explores fetal rights vs. the pregnant person’s rights, which is two sets of rights that are granted to one body. An example of this is seen in the case of Alicia Beltran. When she described a pill addiction to her physician, she was taken into a holding cell where her fetus was given a legal guardian with her rights clearly disregarded. Viewing the fetus as a separate organism means that the fetus is totally independent, which means that genes are the only qualification to be a human being; this clearly isn’t the case since the fetus is completely dependent on the woman’s body to survive and humans are much more than their genes and chromosomes.

Another common rhetorical device that is used is the criticism of a woman’s choice over her well-being. Many pro-life activists question a woman’s moral conscience after she has undergone abortion. Their rhetoric usually focuses on using false statistics to show how over 30% of women regret abortion. However, statistics actually prove that 95% do not regret having an abortion. Many activists use stories such as Jane Roe’s, who was the plaintiff in Roe v. Wade, since she regrets considering an abortion for her unborn child at the time. More extreme measures include using an ultrasound to influence the mother into keeping the child or offering psychological counselling on how abortion leads to mental illnesses. By employing these tactics, we are creating a stigma for mental illnesses and subjecting women to inaccurate facts all so that they can adhere to the pro-life’s standard of an acceptable livelihood. This stigma is brought on by societal stigma perpetuated by pro-life activists. Eventually, this leads many people to look into illegal and harmful forms of abortion.

Out of all of this, the hashtag #HelloHyde has erupted on Twitter. #HelloHyde focuses on the celebration of the Hyde Amendment which made it unlawful for any federal funds to cover the cost of abortion. By employing this invasive tactic, they are using children as sociopolitical props to further promote the idea that life, regardless of the quality, matters. However, by focusing on the lives that the Hyde Amendment “saved,” activists fail to recognize that the Hyde Amendment has killed a lot of people who were forced to undergo illegal abortion. This amendment also poses an institutional inequality to marginalized groups who usually depend on Medicaid for their reproductive health. This rhetoric not only forces people into an unwanted pregnancy, but it also limits their options in to an illegal abortion.

Rhetoric that promotes inaccurate facts does little to help pregnant people. For people to freely make their own decisions about abortion, the information they receive must be reliable and provide safe, accessible, and affordable options for people from a variety of backgrounds.