The Anti-Trans Bathroom Bill in Kansas is Dead…But for How Long? 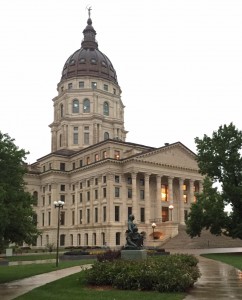 The Kansas State legislature adjourned their 2016 session early Monday morning until their ceremonial adjournment in June. This means that any legislation which was not brought to the floor was automatically killed. In that group of now-dead legislation was the infamous bathroom bill, HB 2737.

It may seem like good news, but I would caution otherwise. The way I see it, the legislature has seen the backlash restrictive bathroom legislation has received in recent news. With it being an election year, no one in a swing district wants to do something too controversial; North Carolina provided enough warning. Effectively, the legislatures will just be waiting out the tide of media coverage on the issue, so if and when it is brought back to floor, the same kind of media pressure will probably be diminished.

In order to prevent the legislature from bringing HB2737 back to the floor or trying to slip it through cracks in terms of reporting, Kansans and activists in states with similar socially conservative political climates, are going to need to keep the heat up over the summer about trans rights.

With the elections in just 6 months, I would urge my fellow Kansas activists to be very vocal this election cycle about HB2737. The best way to see if someone running for your house or senate district is supportive or critical of the bill is to go to town hall meetings and other public speaking events the candidates hold and publicly ask for their stance on the issue.

If anyone who can’t vote in Kansas elections wants to help, I would suggest writing social media posts and articles in order to show the legislators that the reaction in North Carolina is not a special case and can happen to them as well.