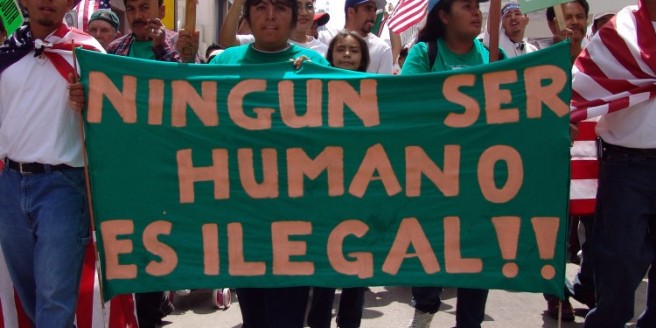 I hear them say ‘go home’; I hear them say ‘fucking immigrants, fucking refugees’. Are they really this arrogant? Do they not know that stability is like a lover with a sweet mouth upon your body one second; the next you are a tremor lying on the floor covered in rubble and old currency waiting for its return. All I can say is, I was once like you, the apathy, the pity, the ungrateful placement and now my home is the mouth of a shark, now my home is the barrel of a gun. I’ll see you on the other side.”
― Warsan Shire, Teaching My Mother How to Give Birth

Immigrants and refugees. Two communities that face disenfranchisement and discrimination due to factors they couldn’t control. Whether it be running away from gang violence in Central America or escaping civil war in Syria, immigrants and refugees constantly make the difficult decision to leave their home, culture, and family for a chance at a better, safer future. They should not be facing further mistreatment and stigma from a country that tells the world to “give me your tired your poor, your huddled masses, yearning to be free”.

A recent proposal from the Department of Homeland Security would separate mothers from their children migrating into the country. Upon separation, children would be placed in the custody of the government while their mothers are detained until a hearing. Both mothers and children are kept in detention centers run by the Immigration and Customs Enforcement (ICE) or Corrections Corporation of America, which makes financial capital over the mass incarceration of black and brown bodies.

While in ICE facilities, mothers and children are subject to violence, sexual assault, and depression due to conditions and harassment from guards on site. Holding immigrant women in these facilities takes away their reproductive autonomy and limits their access to reproductive care. ICE, notorious for their legacy of civil and human rights violations, strips women of their dignity.

From migrating across the border to trying to obtain justice in the courthouse, immigrant women are being policed by the nation’s law enforcement. In California, Texas, Oregon, Colorado, and Arizona there have been reports of ICE agents arresting undocumented immigrant women in the processing of securing protective court orders from domestic abuse. This kind of ‘policing’ criminalizes victims and sends a  message to undocumented women that no place is safe for them in this country.

As anti-immigrant policies are implemented nationwide, and more vulnerable populations are targeted, we as allies, cannot continue to let the Trump administration to silence and oppress immigrant communities. As a supporter of immigrant justice, consider working with and holding up local and national Latina-led reproductive justice organizations such as National Latina Institute for Reproductive Health and Nuestro Texas.

This movement will only be won when we work together to achieve justice and equity for all. There’s strength in our unity and power in our numbers. Also let immigrant and Latina women lead these efforts; as an ally, all we can do is support and give them our bodies.