There’s Something In the Air 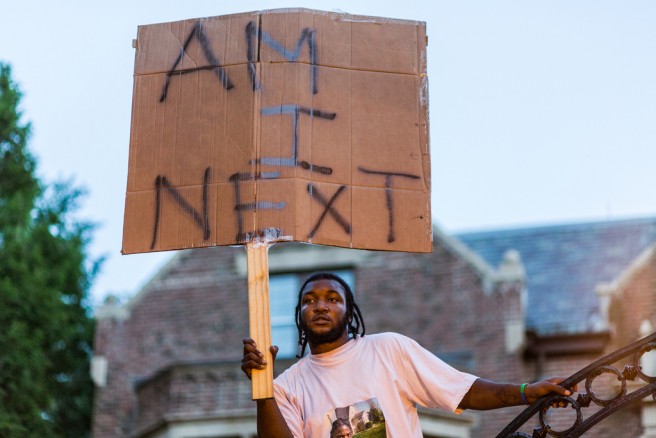 There’s something in the air. It spreads like a plague, an unquestionable fear deep seated in the roots of oppression. Its wings spread ever so gently throughout the country, the home that many black people and other people of color have known all of their lives. The voice that it occupies feels us with fear, hate, sadness and other emotions that interpersonal human reactions haven’t processed yet. This voice approaches the doorsteps of our social spaces and stares us in the face. We stare grimly, desperately and fearfully at this figure. What is a person of color supposed to do in this situation? Is this what our world has become as a result of this new era? Have our lives and our everyday lived experiences become a facade for society to abandon our thoughts and livelihood?

There’s something in the air. It spreads like a plague, an unquestionable fear deep seated in the roots of oppression.

I question every decision I make. Is what I’m doing enough? Will I be rejected from this program due to the preexisting stereotypes that occupy my skin? Every room I go in, this fear occupies my thoughts and completely shatters the confidence that I walked in with. I have often thought of the idea of companies hiring people like me to fulfill a diversity requirement, which seems like a foolproof plan to avoid being questioned about majority white spaces. It has become the norm that when some black people are shown to succeed, it is like oppression doesn’t exist anymore. Any claims of discrimination become invalid in these types of situations. However, when ulterior motives are the only reason for diversity, diversity becomes a term that society uses to win over people of color.

This lack of comfort — what is it rooted in? I drive pass a local playground where I see young children of color playing. They playfully throw water balloons at each other while one group has a war with their Nerf guns. I look off in fear that I’m looking in the face of another Tamir Rice or Tyre King. These kids didn’t get the chance to have a healthy childhood without their bodies being criminalized by a society that views them as disposable. This fear of seeing the slain body of a child wasting away on the streets, similar to the way when a tree falls and no one is there to clean it up. These thoughts fade to the back of my head now. How do I control these emotions that my skin has taught me to be immune to? I have to stay strong. No one wants to think about things that ail them or things that trigger the deepest insecurities they have.

There’s something in the air. It spreads like a plague, an unquestionable fear deep seated in the roots of oppression.

The eyes stare hard back at me. Are those the eyes that voted in favor of our oppression? Did they somehow contribute to this day to day fear of driving at night or walking outside in broad daylight? I reflect back on the hate that this presidency has inflicted about marginalized communities. Racists are endowed with the confidence to spout racist, sexist, homophobic, or xenophobic rhetoric. This language has proven time and time again that it is not punishable by law. After all, Darren Wilson got away with spouting a racial slur at Mike Brown before killing him. Seeing how the deaths of Chay Reed, a trans woman killed in New Orleans, and Korryn Gaines, black woman killed in Maryland, cause outrage from the same groups that promote life ails me. Whose life are they advocating for?

I pause now, as I gasp for air from this suffocating anguish that I feel from the rhetoric that Trump’s era has caused. The erasure of accountability from white skin discourages social justice in this country. This new air that I breathed on the morning in early November had no idea that I would fear the current atmosphere of this country. However, this doesn’t mean that my experiences, emotions and fears aren’t valid. Sure, I fear being killed because I’m black, but living in fear won’t spare our lives. This skin doesn’t peel, fade nor shed. However, my experience will continue to evolve as I navigate through this new atmosphere that has been wrought through this country.

There’s something in the air. It spreads like a plague, an unquestionable fear deep seated in the roots of oppression. And, sadly, there’s no escaping it.