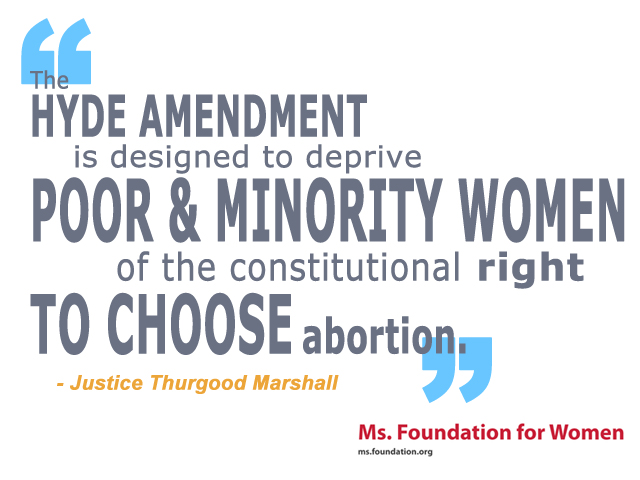 Today marks the anniversary of a dark day in America’s history.

If you’re friends on social media with anybody with the slightest interest in reproductive justice, I’m sure you’ll hear about this today, and maybe you already know what it is, but if you’re curious, I’ll answer your questions now.

Let’s start with the basics. What is the Hyde Amendment?

The Hyde Amendment bans federal funding of abortions, with Medicaid being the primary target. Exceptions are made for rape, incest, and danger to the mother’s life.

Well that doesn’t seem so bad. Maybe it’s a budget thing. Hasn’t Medicaid funding been banned for other conditions?

Actually, no. Abortion is the “only procedure that has ever been banned from Medicaid.”

Can’t people find a way to afford abortions without help from the government?

In a perfect world, yes. But Medicaid exists to help the poorest people in our country, and if they can not get their abortion covered, they may have to carry the pregnancy to term. As we’ve all been taught, raising a child is costly, so being denied an abortion can force families further into poverty.

Well if that’s the case, then why was it passed in the first place?

Because Henry Hyde, the Representative who wrote the amendment, wanted to get rid of all abortions. He knew he couldn’t do that, so this was his next best option. He even stated, “I would certainly like to prevent, if I could legally, anybody having an abortion, a rich woman, a middle class woman, or a poor woman. Unfortunately, the only vehicle available is the HEW Medicaid bill.”

Has it effectively ended abortions in poor communities?

Absolutely not! For many poor families, they need to give up basic necessities to try and afford an abortion. Sometimes abortion funds can help make up the difference. But far too often, people have to go seek alternative methods of abortion, which can lead to medical complications and even death. This article provides a good explanation of the return of illegal abortions. (While it focuses mainly on the situation in Texas, I think that it is a good reference point to see the lengths people are willing to go to to terminate a pregnancy rather than be forced to keep it.)

Why is this Amendment still in existence?

Honestly, the simplest answer I can give to this is that it hasn’t been repealed yet. Whenever it comes up, it’s just casually passed again without much thought. Of course, there are politicians who are actively trying to repeal it, but they’re in the minority. It’s been in effect for so long that it isn’t at the front of many people’s minds.

Okay, this sounds awful and I really don’t like the sound of it. What can I do to help?

Call your senators and representatives and tell them what you want. Join All* Above All, a movement aimed at gettign rid of the Hyde Amendment once and for all. Donate to abortion funds that help low-income people pay for the procedure. And let politicians know that they can’t get away with this forever.

Image via the Ms. Foundation