On Saturday my grandmother, my mother, my sister, my brother and I marched with more than 1 million people around the world.  This, the largest feminist mobilization in decades, took place on all 7 continents. Our message was clear: the feminist future is now, and we’re here to fuck shit up. The next day, I celebrated the 44th anniversary of the Roe v. Wade Supreme Court case with fellow marchers. We fortified our determination to protect this constitutional guarantee of bodily autonomy for all. Today, feminists are united in stopping this week’s first anti-feminist, anti-choice push by the Trump administration: making the Hyde Amendment codified law. This amendment was first instituted in 1976 and banned the use of federal funds for abortion except in cases where the life of the pregnant person was in… Read more » 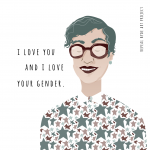 Art and the creators behind some of our favorite work have changed as digital media maintains its hold on audiences the world over. Instagram has become the world’s museum, and finding and appreciating art has become easier than ever. This summer, we want to take a minute to appreciate some of our favorite artists who create work that inspires and excites us as reproductive justice advocates, intersectional feminists, and culture agitators. Click here to see more from the Artists We Love series. Artist Name: Megan Smith What encouraged you to become an artist? I come from a creative family. My grandmother is a painter and so from an early age I was around someone who not only was creating work but who also was teaching me about color, perspective, and, less-overtly, about… Read more »

By Ashton Brasher I keep consistent contact with a friend from my childhood. Over the past few years, her circumstances have become rather difficult. With a dependent child, a complicated romantic life, and living paycheck to paycheck with government assistance, her days are seldom easy. Recently, she approached me with some fears that she might be pregnant again. She immediately said she would want to explore abortion as an option. She felt her life circumstances simply could not support another child. I was humbled by her ability to make a hard decision not only for herself but for her family. A few moments later, a sad fact occurred to me. I asked her about her health insurance provider. My fears were realized when she told me she currently relies on… Read more »

What does it mean when you say, “support the troops?” As a whole, the US has many supportive organizations for those who serve in the military and their families, everything from national campaigns for job placement to the USO providing services for families. But what about abortion and reproductive care?