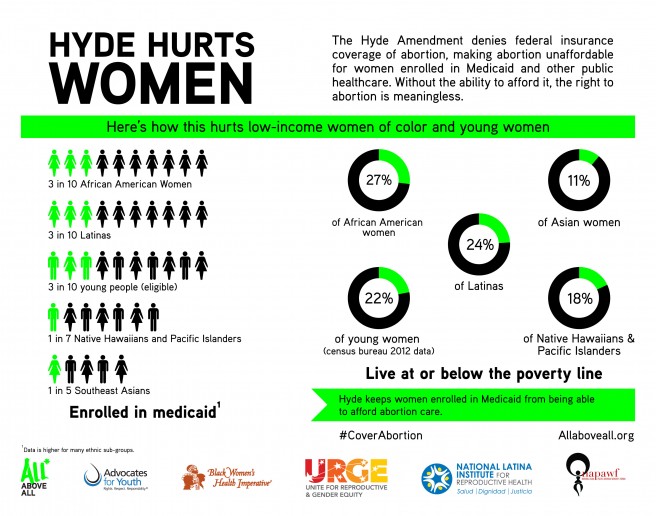 I keep consistent contact with a friend from my childhood. Over the past few years, her circumstances have become rather difficult. With a dependent child, a complicated romantic life, and living paycheck to paycheck with government assistance, her days are seldom easy. Recently, she approached me with some fears that she might be pregnant again. She immediately said she would want to explore abortion as an option. She felt her life circumstances simply could not support another child. I was humbled by her ability to make a hard decision not only for herself but for her family.

A few moments later, a sad fact occurred to me. I asked her about her health insurance provider. My fears were realized when she told me she currently relies on Medicaid for coverage. When she asked me how much the procedure would cost after insurance covered its portion, it was a painful moment to let her know that she wouldn’t receive even a dollar of coverage from Medicaid.

Luckily, it was a false alarm this time. But what about next time? What about for every other woman receiving Medicaid or some other form of federally-funded health insurance? On this day, the 38th anniversary of the passage of the Hyde Amendment, it is important that we reflect on 38 years of an entire portion of the population who essentially cannot access (and if they can, certainly not with ease) one of their most important reproductive rights.

The Hyde Amendment was passed as a reaction to the victory of Roe v. Wade in 1973. Hyde is a legislative provision disallowing the use of federal funds to pay for abortion care with exceptions for incest and rape, though that particular aspect is not guaranteed in every state. The Hyde Amendment comes in to play with funds allocated by the annual appropriations bill for the Department of Health and Human Services, which as aforementioned mainly affects Medicaid. It is not a permanent law, rather an approved “rider” that has been regularly attached to various bills since its passage 38 years ago.

When I was first educated about the Hyde Amendment, I was immediately overwhelmed with its complete lack of consistency with the basic ideals of common sense. Of any subset of the population, to whom is family-planning likely the most crucial? Low-income families require the ability to make these important decisions like any other family in the United States, yet so many are barred from that choice by unfair legislation.

Luckily, countless people are coming together to speak up and rally around the goal of watching no more anniversaries pass for the Hyde Amendment. Two weeks ago, I had the opportunity to represent URGE at All* Above All’s 2nd annual Hill Education Day. On this day, nearly 200 advocates from across the nation joined together to bring important messages about abortion coverage bans to Capitol Hill. People from all backgrounds, faiths, races, and genders walked proudly through the halls of Congress, meeting with elected officials and staff members to assert our beliefs about the disservices done to American women through legislation like the Hyde Amendment.

Before our day on the Hill, Congresswoman Gwen Moore spoke to us out of her appreciation for our work. At one point, she said something that really spoke to me and caused me to examine why I was in Washington, DC that day. She said, “I am not pro-choice in spite of my faith. I am pro-choice because my faith compels me to be.” For her, reproductive rights touch all of our lives, families, and communities.

As we reflect on too many years of low-income women being barred from these crucial services, it’s important to remember why we care. Whether it be our faith, our personal stories, or any other source of our beliefs that drives us to speak up about these issues, I hope you’ll all feel as inspired as I do to see the end of Hyde.

Ashton is the founding chapter leader for URGE at Georgia State University. She became involved with URGE by attending a Reproductive Justice Leadership Institute in fall 2013. Ashton is an English major and an aspiring advocate for reproductive justice issues.