Too Little Too Late, America: The Milo Yiannopoulos Edition 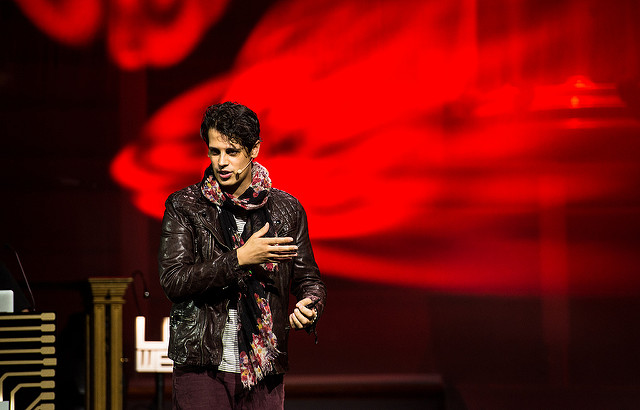 The alt-right poster boy from our nightmares, Milo Yiannopoulos, has been dominating the news for the past few days. Writer at Breitbart News, speaker at universities, and personified air horn, Yiannopoulos has become an online celebrity in recent years, and is experiencing a fall of epic proportions. From his early career as a troll on Twitter and outspoken opponent of the political and social left, he has recently filled his time with outing trans students, inciting passionate protests at his venues, and — most terrifyingly — condoning pedophilia.

However, this article is not going to talk about Yiannopoulos. While I could rant about his words and his actions, how they reflect on the larger American social sphere and how they show us the steadily growing bigotry of the country, this article is mostly about how OUR words and actions contribute to the same results.

Yes, that means yours, mine, everyone’s. Us, the United States, America, right, left, moderate; everyone. Just like Trump, we grew this monster of hate. Now he’s terrorizing the public and we’re left with no way to take Yiannopoulos down, or his army. History repeated itself again, and I doubt any of us have really learned our lesson.

Because it is ridiculous that it had to get to the point of pardoning pedophilia for this man to face consequence for his dangerous agenda. It took him excusing the abuse and traumatization of children, which he has been through himself, for the majority of Americans who support Breibart’s fear mongering to take a step back and say “no, thanks.”

However, when it came to Yiannopoulos using a campus visit to post a photo of a trans woman and harass them for using the restroom — and generally existing — there was little to no major news coverage. Even with the constant misgendering, usage of slurs for transgender people, and a small dash of sexual assault at the end, I didn’t hear about it for weeks afterward. There was no major outrage, there were no repercussions, and there was no cutting of ties between him and the majority of his base.

When Yiannopoulos’ racist attempts to target Leslie Jones on Twitter are regarded as an example of comedy and free speech, the harassment she received as result of this online abuse are normalized and accepted.

When major outlets refer to him as a ‘troll’, despite his larger-than-4chan platform, that is allowing his hatred to grow.

Because — in reality — this is not about Yiannopoulos. After all, he’s just a name, face, and brand of a much larger behavioral trend. If he falls from grace with his fans — and that is a large if, due to their acceptance of almost everything else he has done — there will be another face like his to take over from where he left off. For the alt-right, the face of the movement is interchangeable. Whether it be Milo Yiannopoulos, Donald Trump, or Richard Spencer, cutting one of them down will only result in two more growing in their place.

The American public’s ignorance and apathy let the alt-right’s supremacist movement grow to this size. And those that are going to pay the price?People of color, the trans and non-binary community, women, and every other population that is going to be repressed, harassed, and targeted by the alt-right and their hate.

So, yes, Yiannopoulos might be over. He lost his book and the conservative elite are cutting ties. He may have resigned from the job that made him a household name, and there is the incredibly small possibility that this will put him out of the spotlight. However, his legacy? Will live on. And each day the legacy feeds into more hate, bigotry, and harassment of marginalized populations, we only have ourselves to blame. Now comes the big question–what’s next? How do we keep this movement from growing? How can we subdue the hate that is being normalized as free speech? How can we nip this in the bud after it has already bloomed?

We can try. We can find hate like this and set the standard that this is unaccepted, unsupported, and doesn’t reflect the values that America stands for. With our history, with the current state of things, and with how big the alt-right has grown the past year — I doubt that it’ll be easy.