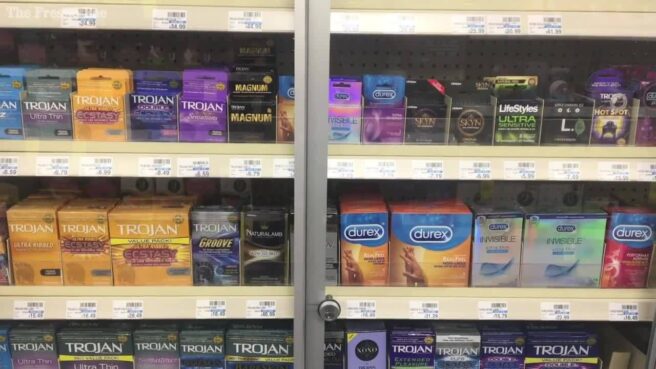 Many of us, especially those from marginalized communities, are used to items being behind locked boxes at the store. A quick trip to the grocery was prolonged by the wait for a staff member to find the right key to the case. Anything from chip bags to White Claw to baking ingredients came with the incredibly unsubtle message of “unworthiness.” We’re considered unworthy, of nice things, of humanity, and of trust.

As my life and career take me to different neighborhoods with varying socio-economic conditions, I notice the degree to which things are locked up differs greatly. For some reason though, from the richest to the poorest neighborhoods, only one product stays consistently behind a plexiglass barrier: condoms.

There always seems to be a debate about lockboxes and cages in grocery and convenience stores; some believe these exist for stores to protect their capital while I argue that they contribute to the dehumanization of marginalized people and help those in power ignore the key question behind why some find stealing food necessary. I argue, though, that the placement of condoms in lockboxes doesn’t really fall into this category of discourse. After all, even the most well-off communities still find this feature necessary. I posit that the lock boxing of condoms is less an economic consideration and more a tool of stigmatization in an attempt to persuade individuals, especially young people, out of having sex.

It is really no secret we live in an extremely sex-negative culture. Whether it was our country’s puritan founding or the renewed grip that conservatism made in the last 50 years, America’s obsession with being anti-sex comes only second to its fixation on who should be stopped from having it. Under the banner of “youth corruption,” young people are one of the biggest targets for messages from the latter. We age restrict sexuality in media while gratuitous violence remains accessible and education on the matter is only mandated in less than half of the country with varying degrees of comprehensiveness. Abstinence-only sex education gives kids no outlet to ask and receive answers for their questions, and the only contraceptive available in their minds is the “fuck around and find out method.” To most of us, this is something far from ideal, but to a vocal minority, it seems to be a consequence they’re willing to ignore for the sake of their ideas around morality.

The more you think about it, though, the more you come to realize the problem of condoms in locked boxes doesn’t really stop at condoms in locked boxes. It’s the most symbolic expression of the difficulty and burden unfairly placed on being sexual, but it grows more worrisome when realizing that this contraceptive publicly placed in a prison-like cage is for some reason the most attainable contraceptive available to us.

The normalized absurdity of the process of obtaining birth control is a representation of the stigma so deeply embedded in the system. Needing health insurance, waiting potentially weeks to months for an appointment, and facing a roulette of doctors who might hold the same unhealthy ideals on sexuality that the outside world does are all factors people face when trying to access what I believe should be a human right. A process that should be as simple as going to a store or joining a mail club is prolonged unnecessarily because of an outdated and harmful system of beliefs.

Even when contraception doesn’t require a prescription, it still feels as though it’s restricted in some way that makes it inaccessible. Plan B pills are legal in all 50 states, require no identification, and have no minimum age to purchase, yet in some places, it’s not only kept in a lockbox but behind the counter at the pharmacy. On top of the other aforementioned methods of barriers when it comes to contraception purchases, the “behind the counter” placement of Plan B paired with its emergency use and the short time window in which you have to use it becomes concerning when you think about the often-limited hours pharmacy counters are even open.

It’s concerning that as a nation, our political leaders and corporate entities are willing to ignore facts around contraception and sexual health and risk the wellbeing of our young people in order to bow to a set of arcane ideas around morality. There are so many “arguments” for why we can’t have various contraceptive methods unlocked and available for the public: they’re high theft items! They’re too easily tampered with! The side effects are too strong to give this out without a pharmacist review! The thing about these though, is that when you consider the instances where condoms and birth control are distributed freely, like colleges and universities, they are used as intended without issues. A pillar of reproductive justice is the ability of communities to make decisions for themselves, and I argue that we can’t do that when the things we need, from food to pills to basic goods, are stuck behind glass. The longer this type of covert policing goes on, it’ll feel like we’re stuck there too.