Visibility is not Enough 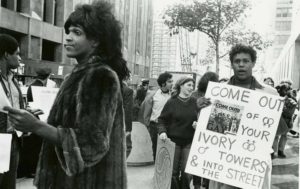 (Marsha P. Johnson handing out flyers in support of the Gay Liberation Front in New York in 1970.)

Every October 11 since the anniversary of the 1987 March on Washington for Lesbian and Gay Rights, thousands of LGBTQ people and allies celebrate National Coming Out Day. To many of us, this day is a positive celebration of our gender identity and our sexuality. The visibility granted by coming out is a refusal to live a life of secrecy. Sharing with others an authentic piece of ourselves can feel like an affirming, liberating, and empowering experience.

While coming out might appear to be an outward, one-time event, it is not. Coming out encompasses many experiences and all of them are deeply personal. It starts with an internal process of coming to terms with our identity when we recognize, process, and accept our sexual orientation and/or gender identity. This can feel frightening to a lot of people because we grow up in a culture that assumes heterosexuality is the norm, and the messages we receive are filled with myths and negative stereotypes about same-sex attractions. It is part of why coming out can be an arduous process. We need to unlearn the harmful messages that invalidate our feelings and relegate our beings to the ‘deviant’ category before we can be steadfast in our self-knowledge and self-worth. Disclosing our identity to others often involves confronting not only the constant assumptions of heterosexuality but also homophobic attitudes and discriminatory practices.

Not all coming out stories are met with the same kind of validation, support, or love. In the 72 countries where homosexuality is illegal, coming out can put LGBTQ people’s life and safety at risk. The LGBTQ rights movement in the U.S. has had several major successes in recent decades. Same-sex sexual acts have been legal nationwide since 2003, and all states license and recognize marriage between same-sex couples since 2015. Nevertheless, the progress of LGBTQ political equality often obscures the pervasiveness of anti-LGBTQ violence and discrimination towards LGBTQ racial minorities, and the idea of choosing to come out and be visible is still a luxury for many.

Transgender folks and queers of color, especially Black and Latinx LGBTQ folks, have been at the forefront among many milestones of the LGBTQ movement. Think about Cooper’s Donuts uprising in Los Angeles in 1959. Compton’s Cafeteria upheaval in San Francisco in 1966, and Stonewall rebellion in New York in 1969. These pioneers have always been on the front line fighting for social freedom and political equality, and the LGBTQ community owes a great debt of gratitude to them.

Why then, are these groups not benefitting from the revolution they sparked? When LGBTQ advocacy solely centers issues like coming out, visibility, and pride, who are we leaving behind?

Historically, coming out was a strategic element in LGBTQ advocacy, and it has proven to aid in gaining access to equal rights for some LGBTQ folks. But the critique of coming-out narratives not being attuned to the intersectionality of race, class, and gender is valid. We need equity in our community and our movement. We can celebrate greater queer visibility and simultaneously work to abolish the institutions and practices that inflict a disproportionate harm queer folks of color, transgender folks (especially Black trans women), and working-class LGBTQ folks. Most importantly, LGBTQ activism cannot be severed from struggles against other forms of oppression.